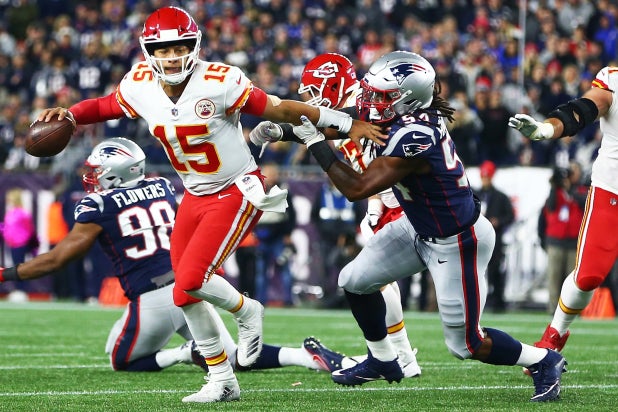 ABC will broadcast all three nights of the NFL draft for the first time next year, the network announced on Monday.

Scheduled for the three nights beginning Thursday, April 25, the NFL draft will be broadcast on ESPN and NFL Network as usual, with ABC airing its own primetime coverage of the first two nights.

Distinct from ESPN’s traditional coverage, the ABC broadcasts will have an “added focus on the personalities and backstories of the draft picks and the overall spectacle of the draft, including live musical acts,” according to the company.

For the third and final day, ABC will simulcast ESPN’s coverage as it did earlier in 2018.

“We are excited that the ABC stations will be the only broadcast home for every round of the 2019 NFL Draft,” said Brian Lawlor, chairman of the ABC Affiliate Association and president of local media for The E.W. Scripps Company. “By collaborating with ESPN, we are ensuring all fans across the nation can enjoy live coverage of the drama and celebration around drafting pro football’s newest stars.”

“ESPN is constantly seeking opportunities to innovate and expand our coverage of major events and the NFL Draft is a perfect example of that. There is no better way to celebrate 40 years of working with the NFL to grow the draft than to bring the considerable assets of The Walt Disney Company to Nashville,” said ESPN president Jimmy Pitaro. “With ESPN networks and platforms, and the addition of ABC as the exclusive broadcast home to the draft, we will bring more resources than ever before as we introduce fans to the next generation of NFL players.”

“The addition of broadcast television for all three days of the 2018 NFL Draft helped to bring this important offseason event to even more fans and resulted in the highest rated and most viewed draft ever,” said Brian Rolapp, chief business and media officer for the National Football League. “We’re looking forward to once again broadcasting all three days of the NFL Draft and excited to have another member of the Disney family with us to help grow this event and showcase the future stars of the NFL.”