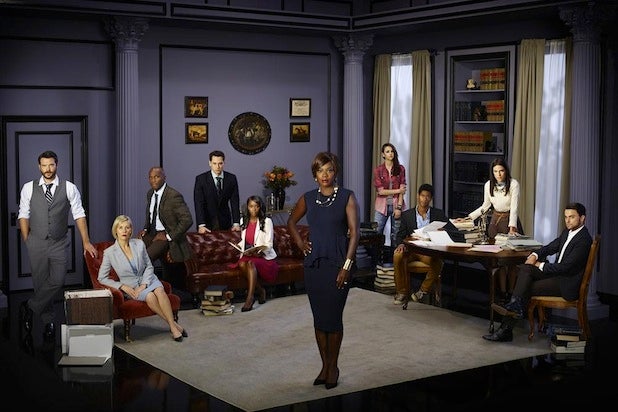 When “How to Get Away With Murder” premieres Thursday night on ABC, Peter Nowalk will probably be watching the response.

As the show’s creator, Nowalk is stepping out with his own show after working on several Shonda Rhimes series.

“It’s obviously scary,” he said. “Things aren’t perfect, I think we’re all perfectionists in our own way like there’s no one else to blame, so it’s definitely a risk for me but it’s also a lucky risk. Nobody gets this chance, all the stars and planets aligned like this – getting Viola Davis, getting the rest of our cast, all these students are so good, the director we have, that Shonda’s producing, and the network seems to really support us, this never happens so as much as I’m afraid of it all – of failing – I also just know that I’m really lucky to be here.”

Also read: ‘How to Get Away With Murder’ Review: Split Verdict on Shonda Rhimes Legal Drama

The series follows a select group of law students as they get deeper and deeper into their law professor Annalise Keating’s (Viola Davis) legal circles while helping her with actual cases.

Annalise’s chosen student associates are nice guy Wes, who got into Middleton Law School off the wait list at the last minute; there’s conniving and beautiful Michaela Pratt (Aja Naomi King); Connor Walsh (Jack Falahee), a sophisticate who will do whatever it takes to get a leg up; quiet Laurel Castillo (Karla Souza), and obnoxiously preppy Asher Millstone (“Orange Is the New Black” co-star Matt McGorry).

Regrettably, we spoke with Nowalk before a New York Times critic called Shonda Rhimes an “angry black woman.” But, we did speak further about what he learned from Rhimes, where the idea for “HTGAWM” came from and how he sees the show’s plots will unravel.

TheWrap: How did you come up with the idea for the show?
Peter Nowalk: It started with the basic instinct of me wanting to tell a story about very normal people in extraordinary circumstance, in a dark circumstance – I wanted to write about people like myself and everyone I know who kind of live these very typical, nice lives and we have dreams and ambitions and have something come into your life and basically hijack it. And for me, I thought nothing better than read about a lot of murder shows, watch all the true crime shows – so for me that just felt like a very kind of exciting premise to write about because it’s not real to my life – it was sort of a dark escapist fantasy for me – thinking about how my life would be different, what would happen if I was caught in a murder.

So from your point of view, the students are the normal kids and their lives are thrown into this crazy world surrounding Prof. Annalise Keating?
Yeah and what I loved about setting it in a school – especially law school – is I know a bunch of lawyers and a lot of people I went to school with who went to law school. They’re very Type-A direct, organized people, so it felt very exciting to me to write about the five, these very different personalities – people that would never be friends – and they’re all thrust into this situation together and they have really big dreams and goals for their life. So, for me that felt really exciting to explore in a TV show because it’s not just like “oh this thing happened to them” but it gives you seasons and seasons of “how does this change them?” You know if your life goes on one path and all of a sudden it’s completely altered – by something that’s out of your control but like what do you do now? Do you go to jail? Do you pretend like it never happened? How does it change you, and so these characters, who are not friends – it felt like a very interesting way to bring them together and have to be in each other’s lives but can give us hopefully lots and lots of episodes.

Annalise Keating isn’t your normal law professor. She’s revealed to bend rules if she needs to.
Yeah, she’s definitely our central heroine and she’s mysterious and oblique and strange and fearsome, but also very complicated. YOu know what’s most important to me about the character and why it’s been such a dream to get Viola to play it is that it’s a very a complex person. I think, from what you get in the pilot, there’s glimpse of different sides of her but she seems very formidable, maybe a little dark but I think that’s only one side of her. I think it’s a character who has learned to live her life by wearing many different masks depending on what the situation calls for and that’s gonna be so much fun. I hope that the audience watches and sees like her in one situation and she acts one way and in another she acts in a completely different way, and I think they’re all parts of her. We all as people are more complicated and can act in different ways and have different motivations, be vulnerable sometimes and really strong in others just depending on where we are and who we’re talking to. So, to have an actress that can play the nuances of our emotions, the complexities of everything we go through, I mean she just makes it all 10 times better.

Tell me a little bit about how you plan the season.
We have a lot of things. We have a few different philos of how we break our stories: case of the week, which is a defendant, she’s helping either defend in court or out of court; some of these people are murderers. We have an episode that’s about an insider trader – any sort of criminal defendant she’ll represent and those are closed-ended stories for an episode so we will introduce the case and she will solve it in the episode to get people those answers that they crave and I’ve always worked on shows that have that procedural element as well as a soapy, serialized element on other shows, those are my favorite types.

So we have the case of the week and we also have a long arc – basically two mysteries that will end up as one mystery.

Yeah it’s gonna be complicated I hope it’s a really fun puzzle for people to figure out. My goal is by the time we catch up to that flash-forward night, you can air all those themes in order. You can see really how it all came together; you fill in the puzzle and it becomes one clear picture at the end of the first season.

The thing with Shonda shows is that fans get very involved, are you preparing yourself for that onslaught of fans?
Well I just hope, that’s all I can hope for. we haven’t premiered yet, a handful of people, industry people, have seen the pilot so all I think about is God willing someone will watch the show and actually wanna engage with it. I’ve been asked that question before and it hasn’t happened yet; it’s happened to Shonda because she’s such a genius and she’s written really good shows, you know we still have to prove ourselves to the audience. Knock on wood that happens and I will welcome it with open arms.

Also read: Shonda Rhimes on ‘How to Get Away With Murder’ Title: ‘We Don’t Consider a Hashtag When We’re Writing a Show’

What is the most challenging thing about stepping up on your own after being a writer on other shows?
EP: It’s obviously a lot scarier, things aren’t perfect, I think we’re all perfectionists in our own way like there’s no one else to blame, so it’s definitely a risk for me but it’s also a lucky risk, nobody gets this chance it has all the stars and planets aligned like this – getting Viola Davis, getting the rest of our cast, all these students are so good, the director we have, that Shonda’s producing, and the network seems to really support us, this never happens so as much as I’m afraid of it all – of failing – I also just know that I’m really lucky to be here in the first place – and I’ve learned so much from just working with great writers and with Shonda and Betsy, just to try to have fun with it because you can definitely get bogged down in the stress and the pressures of it and I just remember “oh no, just return to the original feet of the sitting at your computer and thinking up something fun” so that’s kind of how I’m coping.

I wonder about the fact that Shonda’s very secretive about “Scandal.” She doesn’t like talking about what’s gonna come up in the episode. Do you feel that that’s kind of necessary for your show as well?
I’d say I’m secretive about plot twists and even with the actors people want to know things; I’ve learned that you have to be secretive with her and I think that that’s just a way to protect the show and also to give the audience the best thrill ride – that’s the only place it comes from – it’s not secretive for the sake of being secretive – this is a mystery show, we don’t want people to know what’s gonna happen because then it won’t be as good.

“How to Get Away With Murder” premieres Thursday at 10 p.m. ET on ABC.