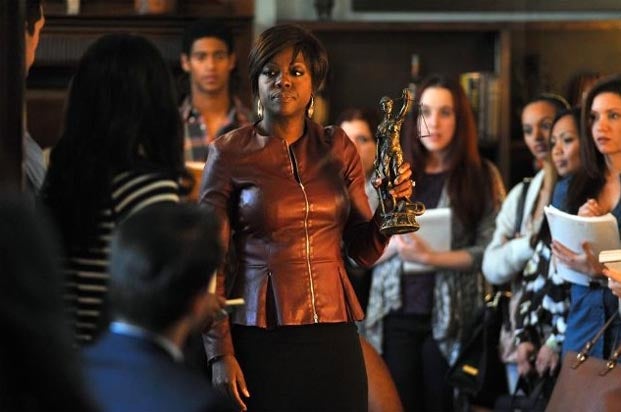 Let’s get this out of the way first: Viola Davis is fierce, and even gets mad, in the premiere of “How to Get Away With Murder,” the new ABC show executive produced by Shonda Rhimes. But her character is hardly the angry black woman New York Times critic Alessandra Stanley described her as in an essay about Rhimes last week, and in any case, the show was created by “Scandal” and “Grey’s Anatomy” alum Peter Nowalk, not Rhimes.

The show does share some similarities with “Grey’s” and “Scandal,” but more closely resembles a cross between 1970s law school drama “The Paper Chase” and teen horror movies.

Davis is just as intimidating as John Houseman’s imperious Professor Kingsfield — and way more complicated. She is the true star of “How to Get Away With Murder,” not its foil, and she delivers as Annalise Keating, a deeply flawed professor and defense attorney in Philadelphia. Her performance is riveting; you can’t take your eyes off this powerful creature when she’s on the screen.

Alas, the students aren’t nearly as compelling; compared to the first-year counterparts in “The Paper Chase,” they’re downright callow, resembling undergrads rather than grad students. When the action shifts to them, the drama suffers. No amount of fancy camera work can make up for that.

And there’s lots of fancy camera work, and time shifting, in “How to Get Away With Murder.”

The series opens with scenes of a bonfire rally and freaked-out students trying to figure out what to do with a dead body. It soon flashes back three months earlier, with a blissful Wes Gibbins (Alfred Enoch) cycling to class.

But the action really gets underway when Davis strides into the room.

“Good morning. I don’t know what terrible things you’ve done up to this point, but clearly your karma is out of balance to get assigned to my class,” she says briskly. “I’m Annalise Keating, and this is Criminal Law 100. Or, as I prefer to call it,” she says, taking up chalk to forcefully write out, “How to Get Away With Murder.”

It’s a thrilling introduction to her character. Davis commands the classroom as the professor, firmly, but not unkindly, quizzes an unprepared student. Later in the episode she shows off Annalise’s legal prowess in the courtroom, confidently leaning up against a jury box as she extracts damning information from a witness.

We also learn that her character is no paragon of virtue at home or in her legal dealings. When her students catch her in the act, she defies them to comment with a baleful stare.

And we get to know the students, who couldn’t possibly be as interesting as their professor, and aren’t. Besides nice guy Wes, who got into Middleton Law School off the wait list at the last minute, there’s conniving and beautiful Michaela Pratt (Aja Naomi King), Connor Walsh (Jack Falahee), a sophisticate who will do whatever it takes to get a leg up, quiet Laurel Castillo (Karla Souza), and obnoxiously preppy Asher Millstone (“Orange Is the New Black” co-star Matt McGorry).

Being a competitive bunch, the students vie against each other for their professor’s favor and a chance to work for her. She asks them to weigh in on a case of hers, inviting them to the court to witness her artful questioning.

Those moments are intercut with scenes of the students trying to dispose of the body, and, as the title suggest, get away with murder.

By the way, there’s more than one murder during the premiere. The debut episode of “How to Get Away With Murder” does not suffer from a shortage of plot twists or stylish flourishes.

Also read: ‘How to Get Away With Murder’ Producers Say You Will Learn Some Law

I just hope that the students become more interesting and the action less disjointed in coming episodes. The drama didn’t quite jell in the pilot, but that may come with time. “Scandal,” after all, took a while to hit its stride.

As a devoted fan of “Grey’s Anatomy” (still watching, thank you) and “Scandal,” I was ready to embrace “How to Get Away With Murder.” That didn’t happen with the pilot.

Davis is strong, but I’m not signing up for a season pass just yet.

Diane Garrett, formerly senior editor of TheWrap, has written for the L.A. Times, Variety and Movieline in addition to TheWrap and once served as a fact checker for TV Guide. She began reviewing for an alt-teen monthly shortly after moving to L.A. Nowadays, she's never far from digital devices.
KEEP READING..