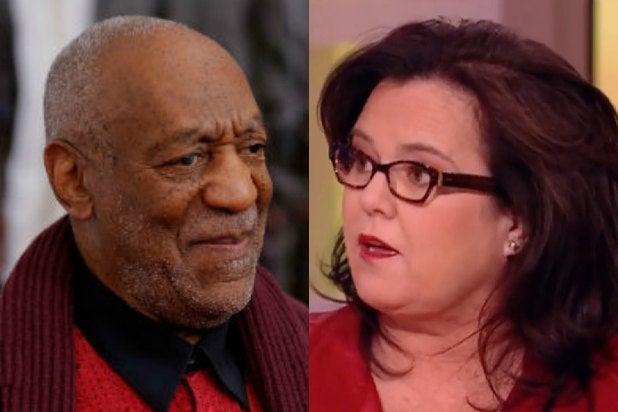 Rosie O’Donnell revealed on Monday’s “The View” that a woman claiming to have been sexually assaulted by Bill Cosby recently reached out to her directly in order to tell her alleged story of abuse.

“I got a private message from one of the Bill Cosby accusers,” O’Donnell said. “Twenty-six women now have accused Bill Cosby. One of them wrote me privately. She is an older woman in her 70s and she lives in the Southwest and she has never been on camera and she was saying she knows at least one is true. Her. And she has sought no financial gain and wants no attention. So it’s interesting that people who do come forward are sometimes seen as people having an alternate agenda.”

“Well, sometimes they are,” co-host Whoopi Goldberg replied. As TheWrap previously reported, Goldberg has voiced her skepticism in previous episodes toward the women accusing Cosby. The comedian even offered Goldberg his thanks in a post on Twitter.

O’Donnell’s revelation came during a “Hot Topics” discussion on Rolling Stone’s report about a female student being gang raped at a University of Virginia frat house. Several details of that report later proved to be inaccurate and untrue, prompting the magazine to apologize for their mistakes.

Goldberg suggested stories such as this were why she has questioned alleged victims in the past, saying: “I’ve gotten a lot of heat from people because I want as much as you can give me to nail the S.O.B. That’s what I want. But I don’t like, people can just say anything and it’s taken as fact. We owe it to ourselves and to our sisters and our brothers who are the folks who may be accused, to get the facts.”

While the UVa. story remains unproven, Rosie Perez slammed any parent who doesn’t explicitly tell their son not to rape a woman while away at college.

“What’s even crazier is the lifestyle on campus where this is rampant, where rape is rampant,” Perez said. “I do not understand the parents who do not tell their sons, ‘Please don’t be a rapist.’ This is wrong. When you go to college, when you go anywhere, you be a gentlemen, you be a man about it and don’t rape young women on campus.”

“We have to teach both because sometimes our young women get out there and drink themselves into a stupor,” Goldberg said. “There is some responsibility. If you go to a frat party, don’t get blind drunk. Don’t put anybody in a position of being able to take advantage of you.”

Watch the video from “The View.”