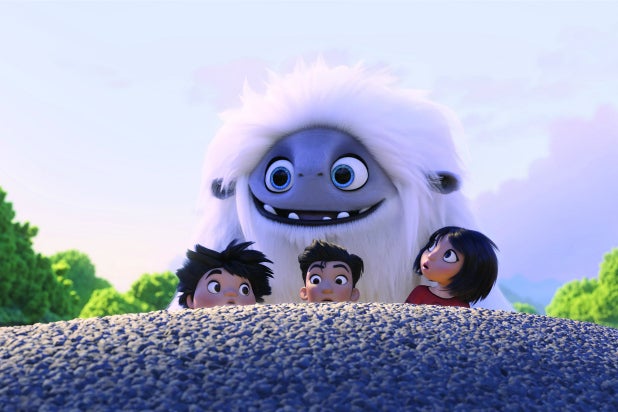 Animation can be a tough venture for filmmakers: The target audience tends to be young children, who simultaneously have a limited attention span while still demanding entertainment at every corner. But then if the story is too juvenile or too preachy, or if the animation itself isn’t eye-catching, then you lose the parents, the all-important keepers of the wallet. And even when an animated film becomes an exquisite piece of cinema, their audiences aren’t necessarily going to run out and buy a stuffed yeti plush afterward.

Writer-director Jill Culton (“Open Season”) understands this mix of priorities, and her latest film “Abominable” falls somewhere in the middle of it all, with a story that’s sweet but formulaic, jokes that are juvenile but not annoying, and the use of gorgeous colors and textures. Nothing here truly changes animation, and yet, you can’t help but walk out of the theater with a smile on your face.

Yi (voiced by Chloe Bennett, “Agents of S.H.I.E.L.D.”) is not your average teenage girl. She doesn’t crave popularity, nor does she care about the latest trends, Instagram, friends, or, well, really anything. Though she lives with her loving mother (Michelle Wong) and Nai Nai (veteran character actress Tsai Chin), Yi isolates herself by doing several odd jobs for neighbors and local businesses, stashing away every penny earned in a secret fort-like space on the roof of her apartment building.

Also Read: 'Abominable' Will Try to Draw Families to Theaters While 'Joker' Looms

She’s saving up to go on a trip that was originally planned by her father before his death, which she hasn’t allowed herself to grieve. The rooftop hideaway is the only place Yi allows herself to play the violin, a talent she shared with her father but now refuses to perform for anyone else.

It’s during one of her escapes to the roof that she finds a magical yeti, asleep on the roof after a harrowing escape from the high-tech building where billionaire Mr. Burnish (Eddie Izzard) and his trusted zoologist Dr. Zara (Sarah Paulson)  keep exotic and rare animals. After an initially bumpy meeting, Yi befriends and names the young yeti Everest, after a picture that he recognizes as his home. Yi, along with her buddies, goofy tag-along Peng (Albert Tsai, “Coop and Cami Ask the World”) and his suave, charming cousin Jin (Tenzing Norgay Trainor, “Liv and Maddie”), take off on a mission to get Everest home.

Adults will be quick to see resemblances to childhood favorites like “E.T.,” “The Neverending Story” and, in one peak moment, “Willy Wonka and the Chocolate Factory” with an added layer of “King Kong.” However, Culton isn’t copying any of those films; she just uses those references to connect to that childhood wonder many of us grown-ups have left behind. Though her script plays a bit formulaic, hitting specific marks of must-have gags, jokes and sentiment at very specific moments, there are enough touches of warmth and sweetness that keep the story enjoyable for audiences both young and not-so-young.

For me, the thrill was in seeing a specifically Chinese family in a film for all ages that never needs to call special attention to that fact. “Abominable” is a Chinese co-production between DreamWorks and Pearl Studio, which allows the natural storytelling to unfold without Culton venturing into Westernizing or appropriating. The specificity of the Chinese culture is shown through landscapes, and food, and gentle allusions to ideologies within certain characters’ personalities, particularly Nai Nai’s. The story feels specific enough for those communities to feel represented while remaining utterly universal.

The true beauty of “Abominable,” however, lies in its vivid and intoxicating use of color, from the magical blues and pastels that surround Yi and Everest, to the bright yellows and greens in a tidal wave of a field, to the hues of pinks and purples during more emotional moments. The animation captures the essence of the journey that each character is experiencing.

Those colors, combined with composer Rupert Gregson-Williams’ gorgeous use of violins and organs — and, in the film’s most pivotal moment, Coldplay’s “Fix You” — create an atmosphere that, even with the film’s predictable outcome, makes for an enjoyable family experience.