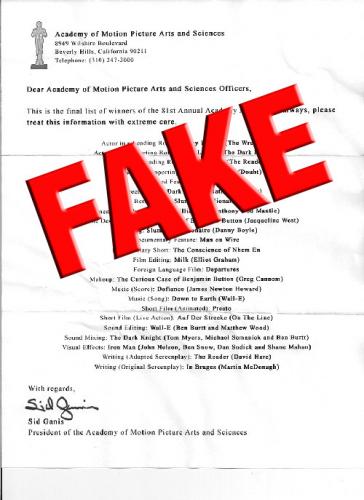 What is hilarious about a list of “Oscar winners” circulating for the last couple of days around the Internet is how obviously a fraud it is.

As most everyone in Hollywood know, the winners are tallied by PriceWaterhouseCooper up to just before the ceremony. It’s not as if some committee at the Academy of Motion Picture Arts and Sciences sits in a room tallying the ballots, with the secretary-treasurer typing up a list mid-week before Oscar Sunday and passing it around.

PriceWaterhouse tallies the ballots. Those two guys who come out on stage every year are in charge of The List, and they guard it most zealously.

This is well-known stuff.

No big deal, right? The Academy denied it via spokeswoman Leslie Unger, who called it “a complete fraud.” Ganis immediately said it was a hoax.

Nonetheless it was just the kind of story that the Internet loves to latch onto, eventually whipping up enough interest for the story-hungry maw of mainstream media to suck it up. So it has now bounced from miniscule blogs like Cinematical a few days ago to local KCAL tv news to a top story on the BBC feed.

And what might be worse, is that the list may turn out to be correct: “Slumdog” for Best Picture, Mickey Rourke for Best Actor, Kate Winslet for Best Actress, and Heath Ledger to boot.

That would say more about the predictability of this year’s spectacle than anything about security in the age of the Internet.