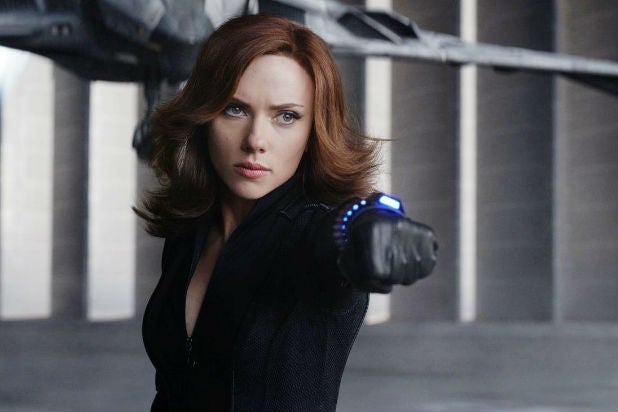 One of the largest looming questions from “Captain America: Civil War” is not about a post-credits scene or A-list casting — it’s the question of when Scarlett Johansson‘s Black Widow will finally get her own film, like most of the original Avengers have enjoyed.

The former spy and current Avenger is arguably a more fully realized character than ever, and it’s not falling on deaf ears at the executive level. Marvel chief Kevin Feige said in an interview that his company and partner Disney are “committing” to giving the character her own movie and possible franchise.

But unless something changes, it is at least four years away. Of the six original “Avengers,” only Black Widow and Jeremy Renner‘s Hawkeye have not had their own films.

“That character’s journey, over her various appearances, is one coming out of the shadows and into the light,” screenwriters Stephen McFeely and Christopher Markus told TheWrap in a wide-ranging chat before “Civil War”‘s release.

“We met her as Natalie Rushman, a spy in Tony Stark’s camp, then she joins SHIELD and at the end of ‘Winter Solider’ leaks all these secrets,” McFeely said of her Edward Snowden-esque move at the end of “Captain America: The Winter Solider.”

“She’s out as a good guy, and this is what it means to take on the responsibility of leadership,” Markus added.

Her role in “Civil War” is crucial as both an ambassador for superheroes to the general public and a decider on who wins the battle between Captain America and Iron Man. During the climactic airport fight scene, Black Widow betrays her loyalty to Iron Man and facilitates the escape of Captain America (with whom she still enjoys a lingering flirtation).

“The Russo Brothers probably had a phone call with her once we made that decision,” the writers recalled, “but she was game.”

As Black Widow, and by extension Johansson, moves as a free agent among hero loyalties and government agencies, it’s easy to see why fans are clamoring to see her go it alone. She could even be the Marvel Cinematic Universe’s response to Jason Bourne, HitFix wrote.

The studio should also pay attention to Johansson’s draw as action star — she’s seen success in the genre where her male counterparts have not, when it comes to non-Marvel titles.

“Lucy,” a 2014 action hybrid from director Luc Besson, grossed almost $500 million worldwide with Johansson in the lead. The mighty Thor (Chris Hemsworth) has not failed so well with fringe efforts like “Blackhat” and Ron Howard‘s “In The Heart of The Sea.”

A recent survey of 1000 fans, conducted by Fandango, saw 48 percent choose Black Widow as the character they’d most like to see in a standalone film.

Disney-Marvel projects are dated through 2019, ending with “Avengers: Infinity War – Part 2,” in which Black Widow is all but guaranteed to appear. The 2020 slate and beyond will determine if she gets her solo chance to shine.