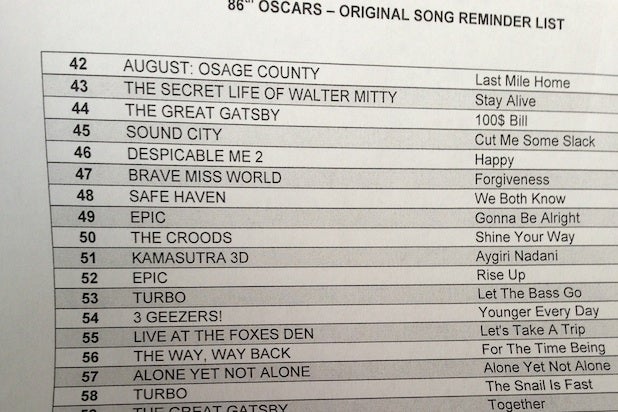 In the face of mounting criticism over its decision to rescind the Best Original Song nomination for “Alone Yet Not Alone,” the Academy has released a statement clarifying why the move was taken by its Board of Governors.

A central issue, the statement said, is that the judging process for the category is meant to be anonymous, with voters given a DVD with film clips, along with a sheet listing the names of songs and the movies they come from, but not the names of their composers. (photo of the reminder list above)

In an email sent to at least 70 of the branch’s voters, former Music Branch governor and longtime executive committee member Bruce Broughton brought attention to the fact that he had co-written entry No. 57 on the list of entries.

“When he identified the song as track #57 as one he had composed, and asked voting branch members to listen to it, he took advantage of information that few other potential nominees are privy to,” the statement said.

Of course, other songs had the advantage of large-scale campaigns that reminded voters, for example, that U2 had written and performed the song “Ordinary Love” from “Mandela: Long Walk to Freedom,” or that Pharrell Williams had done the same for “Happy” from “Despicable Me 2.” Broughton has said that he was simply trying to give his song a chance in the face of competitors from bigger, more well-funded films.

In addition, voters who watch the DVD of eligible songs would certainly know that song No. 45, for instance, was performed by (and most likely written by) Paul McCartney, since the footage from the film “Sound City” shows McCartney performing the song with Dave Grohl and the other surviving members of Nirvana.

And the Academy does allow studios to send out DVDs that include “For Your Consideration” lists with the names of all potential nominees, including the names of songwriters.

So Broughton’s violation was not so much identifying himself as the song’s co-writer, but referencing its number on the reminder list, a piece of information not available to most contenders.

“Alone Yet Not Alone,” the title track to a Christian historical drama, was a surprise nominee from a film that virtually no voters had seen. It played once a day for one week in a single theater in Encino to meet Oscar qualifying rules, and is not scheduled to open theatrically until June 2014.

When the initial announcement was made that the nomination had been rescinded, the Academy did not spell out exactly why the Board of Governors came to that decision on Tuesday night. Since the announcement was made on Wednesday, AMPAS has come under fire for disqualifying the song for vague reasons, with producer Gerald Molen charging in a letter to Academy president Cheryl Boone Isaacs that the decision could be seen as “faith-based bigotry.”

Also read: Why the Oscar Song Process Has Me Singing the Blues

(Molen is the same person who last year charged that the documentary branch’s failure to nominate “2016 Obama’s America” was politically motivated.)

The AMPAS statement is clearly designed to stave off criticism by clarifying the reasons for the board’s action.

“The Board of Governors’ decision to rescind the Original Song nomination for ‘Alone Yet Not Alone,’ music by Bruce Broughton, was made thoughtfully and after careful consideration.  The Academy takes very seriously anything that undermines the integrity of the Oscars voting process. The Board regretfully concluded that Mr. Broughton’s actions did precisely that.

“The nominating process for Original Song is intended to be anonymous, with each eligible song listed only by title and the name of the film in which it is used–the idea being to prevent favoritism and promote unbiased voting.  It’s been a long-standing policy and practice of the Academy–as well as a requirement of Rule 5.3 of the 86th Academy Awards Rules–­­to omit composer and lyricist credits from the DVD of eligible songs that are sent to members of the Music Branch.  The Academy wants members to vote for nominees based solely on the achievement of a particular song in a movie, without regard to who may have written it.

“Mr. Broughton sent an email to at least 70 of his fellow Music Branch members–nearly one-third of the branch’s 240 members.  When he identified the song as track #57 as one he had composed, and asked voting branch members to listen to it, he took advantage of information that few other potential nominees are privy to.  As a former Academy Governor and current member of the Music Branch’s executive committee, Mr. Broughton should have been more cautious about acting in a way that made it appear as if he were taking advantage of his position to exert undue influence. At a minimum, his actions called into question whether the process was ‘fair and equitable,’ as the Academy’s rules require. The Academy is dedicated to doing everything it can to ensure a level playing field for all potential Oscar contenders–including those who don’t enjoy the access, knowledge, and influence of a long-standing Academy insider.”