Now that everybody’s chiming in with Top 10 lists, the Academy couldn’t be left out.

Obviously, their true Top 10 list, the one that really counts, won’t be announced until February, when they unveil the 10 best-picture nominees. But for the last couple of weeks, they’ve been putting up a different list on the AMPAS website, oscars.org: “Top 10 Video Moments of 2009.”

It doesn’t tell us a thing about this year’s race, of course, because all the entries are from Academy events over the course of the year, from the Student Academy Awards to AMPAS tributes to director Akira Kurosawa, songwriters Alan and Marilyn Bergman, and animator Milt Kahl. 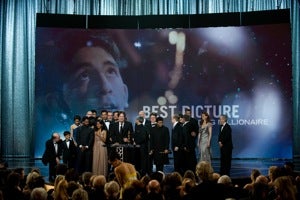 There’s also one moment from the recent Governors Awards ceremony, when Lauren Bacall won her honorary Oscar; a recap of the Scientific and Technical Awards from last February; and, at number one, the “Slumdog Millionaire” best-picture win at the 2008 Oscar ceremony (right).

I can quibble with some of their selections: I mean, if you’re going to pick a moment from the wonderfully entertaining “Harold and Maude” screening and tribute to director Hal Ashby, there were far livelier ones than the rather routine Diablo Cody explanation for why she loved the film, even if they probably didn’t have the rights to show one of the three songs performed that night by the Artist Formerly Known as Cat Stevens.

And while Bacall’s speech was fun, for me other moments from that night (for instance, Quentin Tarantino’s speech praising Roger Corman, or Jon Bloom’s highlight reel covering Gordon Willis’ career) were even more indelible.

But, you know, they’ve got a year’s worth of events to choose from, and they wanted to spread the kudos, so for now this is their Top 10. And it’s got a great Trey Parker story from past AMPAS president Bob Rehme, and a terrific cat imitation by Mel Brooks.

And on February 2, they’ll unveil that other Top 10.

Videos from all ten of their choices are here.