Think the Academy wants a younger audience to watch the Oscar show?

Last week, AMPAS released the names of the semi-finalists in the Academy/mtvU Oscar Red Carpet Correspondent Contest, in which college journalists are competing for spots on the red carpet and in the Oscar press room by posting videos at oscars.mtvu.com. (I like the two teams from Emerson College, although Dean Dimitruk kinda scares me.) 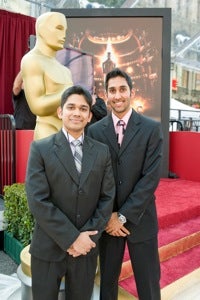 And on Tuesday, AMPAS unveiled another contest aimed at college students: the first "College Oscar Watch Party Contest," in which students at colleges around the country will be able to show that they threw the best college-campus Oscar party.  The winners get some of their party footage posted on oscar.com, as well as a pair of bleacher seats to watch next year’s Oscar arrivals.

(No, they don’t get tickets to the show — the Academy never gives away Oscar tickets in any kind of contest.)

According to the AMPAS press release, the criteria for the parties is "enthusiasm (i.e., number of attendees, how the event was publicized); creativity (i.e., themes, decorations, food); and guest involvement (i.e., games, activities)."

So there you go, college students.  Whip up some enthusiasm, persuade all your friends to show up, drop invites from a hot-air balloon, come up with dishes themed to all the Best Picture nominees (K-rations for "Hurt Locker," airline meals for "Up in the Air," bratwurst for "Inglourious Basterds," something blue and organic for "Avatar," and maybe you ought to skip "Precious"), and get those Oscar trivia questions ready.

Party organizers (as many as four for each party) need to register with the Academy by February 19 by downloading the form at www.oscars.org.  Afterwards, they’ll need to post up to 10 photos on Flickr and five minutes of video on YouTube, as well as submitting a 500-word recap to marketing@oscars.org.

The full rules are here.

And the press release is here.