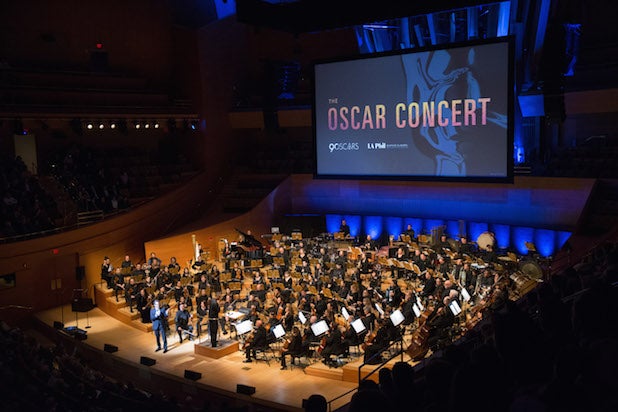 Three directors, four songwriters, four composers, a handful of publicists and dozens of Oscar voters were on hand for a gala gathering on Wednesday night at Walt Disney Concert Hall in downtown Los Angeles — but for the first time in months, that collection of people came together on a night that involved no Oscar campaigning whatsoever.

That’s because voting ended on Tuesday, making Wednesday’s “Oscar Concert” an event that couldn’t be anything but a showcase and celebration of the five Oscar-nominated film scores. The show was performed by the Los Angeles Philharmonic in the grand surroundings of Disney Hall, in front of an audience that included last year’s score winner, Justin Hurwitz, and Oscar song nominees Benj Pasek, Justin Paul, Diane Warren and Common.

The concert was part of a three-year alliance between the Academy and the Philharmonic, which began last year with the presentation of “Rebel Without a Cause,” “On the Waterfront” and “Casblanca” with live orchestral accompaniment. At a post-concert reception, L.A. Philharmonic CEO Simon Woods and Academy CEO Dawn Hudson let it slip that the partnership will culminate next year with the Philharmonic performing live on the Academy Awards, conducted by its celebrated artistic and musical director, Gustavo Dudamel.

Also Read: Oscar Predictions 2018: Will 'The Shape of Water' Rise to the Top in the Wildest Race in Years?

Wednesday’s was the second Oscar-week concert devoted to nominated music, with the first taking place in 2014 at Royce Hall on the UCLA campus. But moving to Disney Hall and enlisting the LA Phil, one of world’s greatest and most adventurous orchestras, moved things to a whole new level.

These suites, conducted by Thomas Wilkins, typically took music from three or four classic scores and illustrated it not just with scenes from those movies, but from lots of other movies, too. In the “Sound of Home” segment, for example, Nino Rota’s music for “Amarcord” played over scenes from that movie along with “The Lord of the Rings: The Fellowship of the Ring,” “The Last Emperor,” “Dances With Wolves,” “The Sound of Music,” “Parenthood” and several others.

Later, Erich Wolfgang Korngold’s Oscar-winning music for 1938 Errol Flynn swashbuckler “The Adventures of Robin Hood” was also used under scenes from “Casablanca” and “An American in Paris,” Luis Enriquez Bacalov’s “Il Postino” score replaced James Horner’s music from “Titanic,” and Mica Levi’s creepy music for “Jackie” was dropped underneath scenes from “The Shining” and even “Jaws.”

It made for entertaining clip packages, even if it was a bit odd to find an evening devoted to film music essentially making the case that music written for one movie is eminently adaptable to another, and that images we associate with one composer can work with the music of a different composer.

But really, the idea was to have fun with mood and genre and to let the Philharmonic show off its range and versatility. The clips also posited an alternate view of movie history, with far more foreign films and movies with diverse casts than you’d typically find on a reel of Oscar-recognized films. Make no mistake, an Academy branch that was once known for being extremely heavy on white men of an advanced age is working hard to present a message of diversity.

If the first half of the show was fun, the second half was the real point of the Oscar Concert. The five nominated scores were introduced by the films’ directors — Guillermo del Toro, Paul Thomas Anderson and Rian Johnson in person, Martin McDonagh and Christopher Nolan on video — and four of them were on hand to either conduct or perform five- to 10-minute selections from their films. The fifth, “Phantom Thread” composer Jonny Greenwood, was not present, but his music was performed.

For this section, the video screen was not used; we heard the music without seeing the images for which it was written, which marvelously put the focus squarely on five exceptional scores and one exceptional orchestra.

It opened with Carter Burwell’s lovely, evocative and slightly unsettling score to “Three Billboards Outside Ebbing, Missouri.” Burwell’s suite, which he conducted, ended with soprano Liv Redpath performing a ghostly version of the transcendent early-19th-century Irish song “The Last Rose of Summer,” which spotlighted one of the true strength’s of Burwell’s score: the way it is perfectly interwoven with the canny selection of songs that McDonagh uses in the film.

Alexandre Desplat’s “The Shape of Water” score, which followed, was delicate and ravishing; as del Toro pointed out in his introduction, the film’s two main characters don’t speak, so he relied on Desplat to give them a voice.

Introducing the “House of Woodcock” theme from Greenwood’s “Phantom Thread” music, Paul Thomas Anderson said he asked the Radiohead guitarist to “write some music like Nelson Riddle would,” figuring that the combination of that ’50s composer’s style and Greenwood’s “British, depressed and atonal” approach would yield something interesting. Which, of course, it did: The “Phantom Thread” music is gentle and elegant, but with an uneasy sense that something’s not quite right.

It was followed by 51-time nominee John Williams, who got the night’s biggest ovation from the audience and from the orchestra simply for walking on stage — and another ovation for the richly dramatic “Star Wars: The Last Jedi” cue “The Rebellion Is Reborn.”

“John is a legend, but he doesn’t work like a legend,” said director Johnson. “He works like a little kid sprinting toward a playground because that’s where the toys are.”

And while you might think it’d be tough to follow John Williams, Hans Zimmer did just that with the monumental “Home” from “Dunkirk.” Nolan said he wanted music that was completely integrated with the film’s sound effects and picture, and in fact the composition began with aircraft noises before building to a deep, massive and doomy throb that became bigger and bigger before yielding to a beautiful, yearning and melodic coda.

It brought the house down without detracting from anything that had come before it. Instead, the entire post-intermission section was simply a vivid showcase for the orchestra’s versatility, and a spectacular listening experience that flowed from the acoustic intimacy of “Three Billboards” to the metallic thunder of “Dunkirk.”

And while seeing Dudamel and the Philharmonic on the Oscar stage next year will no doubt be a treat, the real lesson of Wednesday’s Oscar Concert was that the Academy shouldn’t wait another four years to do this again. Instead, they should immediately book that hall and sign up that orchestra for an encore next February.