So much for that “extortion” plot that director James Toback said kept his film “Tyson” off the Oscar shortlist.

In Friday’s New York Times, the director charged that during the voting process for the documentary feature award, he encountered an incident “which I fully put in the category of extortion.” He stood behind his comments in a statement released this morning:

"I regret that I didn’t bring my concerns to the attention of the Academy sooner but I have now done so and I have been reassured that they are looking into the matter." 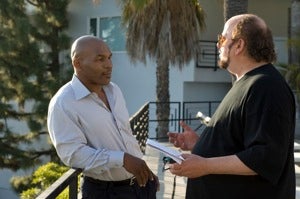 Toback declined to give any more details about his complaint – but the Academy’s executive director, Bruce Davis, tells theWrap that Toback’s “concern was that one of the documentarians voting to pick the shortlist bore him a grudge and should have recused himself/herself from the balloting.”

The Academy did indeed investigate, Davis says, asking PricewaterhouseCoopers to examine the voting records and determine if the action of any one voter would have been enough to deny “Tyson” a spot it otherwise would have earned.

The accounting firm, he says, quoting PwC’s report, “has assured us that ‘no single voter was responsible for [“Tyson”’s] failure to make the shortlist….’”

In the Times story, Toback referred to the documentary voters as “some tiny, dirty covert weirdly protective little group within the Academy.”

In fact, the documentary branch of the Academy contains 151 members, including Michael Moore (whose “Capitalism: A Love Story” was also left off the shortlist), Penelope Spheeris, Albert Maysles and Stacy Peralta. All are eligible to take part in the initial round of voting, in which each participating member was sent screeners of 15 of the 89 eligible documentary features.

The division of labor means that each of the eligible documentaries will have been scored by about two dozen members – not a large body of voters, but one that should be big enough to absorb any individuals looking to skew the vote for personal reasons.

While the shortlist always contains surprises, most observers figure they have to do with personal preferences of the documentary filmmakers who make up the branch, not with grudges or failed extortion plots.

In an interview conducted before the shortlist was announced, Toback told And the Winner Is … columnist Scott Feinberg about a conversation he’d recently had with Tyson – one that at the moment looks prescient.

“I was talking to him a couple of weeks ago,” Toback told Feinberg, “and I said to him, ‘You know, you and I’ — because I do put myself in the same category — ‘are in the unique and unfortunate position of probably having caused ourselves more pain and misery than any of our enemies or people who wished us ill ever could have done in combination.’”

(Photo of Tyson and Toback by Tracey Morris/Sony Pictures Classics)