One actress, two producers and a cinematographer are the newest Oscar winners after tonight’s meeting of the Academy’s board of governors, which voted to bestow honorary awards on Lauren Bacall, John Calley, Roger Corman and Gordon Willis.

Calley, a former executive at Sony, Warner Bros. and United Artists and the producer of such films as "The Remains of the Day" and "The DaVinci Code," will receive the Irving Thalberg Award, which goes to a producer "whose body of work reflects a consistently high quality of motion picture production." 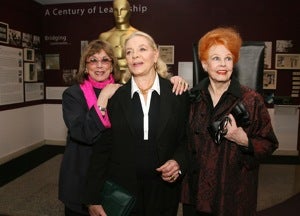 The other three will receive Honorary Oscars.  Bacall, the star of such film as "To Have and Have Not" and "Key Largo," surprisingly has only one prior Oscar nomination despite starring in more than 30 movies.  She was nominated for best supporting actress for her role in "The Mirror Has Two Faces" in 1996, and was considered the heavy favorite but was famously upset by Juliette Binoche in "The English Patient." (At left, she’s flanked by Phyllis Newman and Arlene Dahl at a 2006 Academy event.  Photo: AMPAS)

Corman is a legendary director and producer of low-budget films whose movies rarely figure into the Oscar race; among his more than 300 productions are the original "The Little Shop of Horrors,"  "The Masque of the Red Death" and "The Wild Angels."  His cinematic resume, though, is clearly overshadowed in the Academy’s eyes by the variety of top filmmaking talent he discovered or nurtured over the years, including Martin Scorsese, Francis Ford Coppola, Jonathan Demme, James Cameron and Ron Howard.

Willis has shot more than 30 films, including all three "Godfather" films, Woody Allen’s "Annie Hall" and "Manhattan," and "All the President’s Men."  His two prior Oscar nominations came for "Zelig" and "The Godfather, Part III."

The four make up the largest group of honorary Oscar winners in 30 years, courtesy of new rules that made it easier to vote multiple awards.  The first three honorary awards required only a majority vote of the 43 governors; the fourth required a three-fourths vote.

All four Governors Awards will be presented at a special event on November 14, with a recap on the Oscar show in March.

The Academy press release announcing the awards is here.