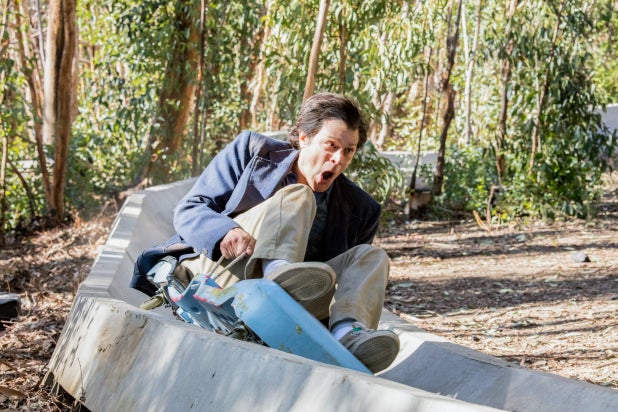 It’s a tiny point on the Venn diagram where “based on a true story” and “Jackass” intersect, but Johnny Knoxville manages to find that sweet spot with “Action Point,” a movie that’s clearly inspired by the infamously perilous New Jersey attraction Action Park, whose deadly rides remain the stuff of legend decades after its gates were bolted shut.

Before Disney and Six Flags and other conglomerates put them out of business, there were seedy, shabby and no doubt unsafe amusement parks dotting the nation from coast to coast. “Action Point” would argue, albeit not always successfully, that what we gained in standards of security and safety, we lost in regional flavor and eccentricity as the United States grew more and more corporatized.

As post-“Jackass” movies go, “Action Point” makes more of an effort to sandwich some plot between the literally painful slapstick comedy, but if you love that formula — Knoxville falls off something, or into something, or has something projected at him, making him wince and then deliver his famous high-pitched giggle — you’ll want a ticket to ride.

We begin with Knoxville, slathered in his “Bad Grandpa” old-age makeup, as D.C., who regales his granddaughter with stories of his days in the amusement-park business. Cut to 1978, when D.C.’s daughter Boogie (Eleanor Worthington-Cox, “Maleficent”) arrives in Calico Corners to spend another summer with her dad. He could use the distraction, since the opening of a corporate-owned mega park nearby is digging into the profits of Action Point, a ramshackle, lakeside facility whose safety regulations are lax, to put it kindly.

It was the 1970s, when kids slid down concrete, swam with little supervision, snuck beers and no one got sued. At least, that’s the fantasy that “Action Point” peddles, as D.C. and his crew of misfits (including fellow “Jackass” alum Chris Pontius as Benny, who’s great with hatchets but terrible at being a lifeguard) are the underdogs trying to save the park from the machinations of local real-estate salesman Fred Knoblack (Dan Bakkedahl).

There’s some plotting regarding Boogie and her desire to have D.C. live up to his responsibilities as a dad (and to take her to a Clash concert), but the movie thankfully whisks past this as quickly as possible to get us to the next opportunity for someone to suffer a hilarious potential concussion. Director Tim Kirkby (whose stellar TV comedy credits include “Fleabag,” “Veep” and “Look Around You”) creates a rhythm that’s as slack and inattentive as its lead character, stumbling along from set piece to set piece and happily repeating sight gags like a bear that drinks Schlitz from the can.

“Action Point” maintains a hazy 70s feel — jumping from the modern sequences to the sun-dappled flashbacks feels like watching “Little Darlings” on commercial TV, where you’re thrust suddenly back into hi-def — courtesy of cinematographer Michael Slyman.

It’s worth noting, however, that some of the film’s 70s-ness reminds us of that era’s less attractive qualities, particularly the fact that there are only two token characters of color who get any speaking lines. It’s a bit like “Wet Hot American Summer,” without that movie’s cognizance of the limitations of nostalgia.

The closing-credits outtakes, much like those of the great Jackie Chan movies of yore, remind us that, yes, that’s Knoxville himself taking a lot of those lumps, and it’s impressive that he and Pontius (and what has to be a legion of talented stuntpersons) are still standing and chuckling in the face of such physical abuse. If you were a “Jackass” fan back in their prime, you’ll probably still chuckle alongside them as they continue to risk life and limb for the sake of slapstick.