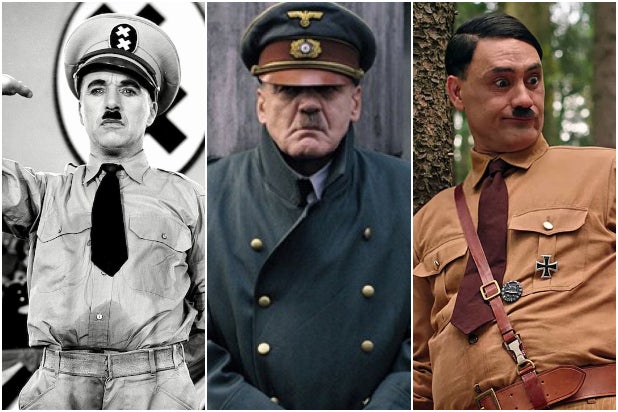 Playing a villain in a movie is a great career move for an actor, but playing a real-life, universally reviled monster like Adolf Hitler is not necessarily a decision that's made lightly. Even in the history of countless movie Nazis, having the guts and gravitas to actually play Hitler is something else entirely. Taika Waititi, who portrays a satirical, imaginary version of Der Führer inside a young boy's mind for his latest film "Jojo Rabbit," only got his movie made under the studio's condition that he play the part of Hitler. But he's not the only actor who's made that leap: 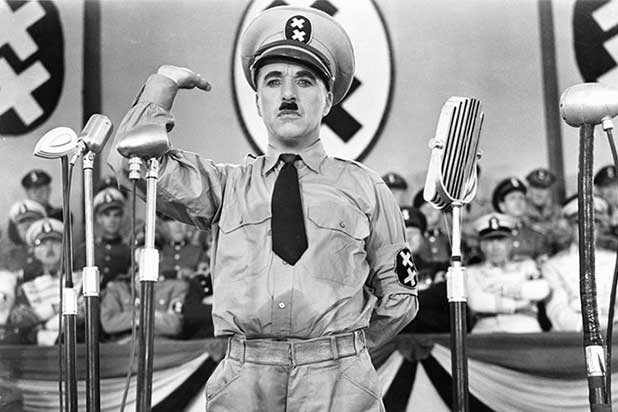 United Artists
Charles Chaplin - "The Great Dictator" (1940) Though Charlie Chaplin's Little Tramp and Adolf Hitler shared the same pencil-thin mustache, Chaplin took a risk making a satire about the German dictator. He directly associated his most iconic character with the world leader at a time in history when many Americans were still torn about the need to enter the war. The film has many classic Chaplin gags, including a famous sequence of a ballet with the globe, but the tone was far different, and the film predictably got banned in several countries. Chaplin would never play The Tramp again. 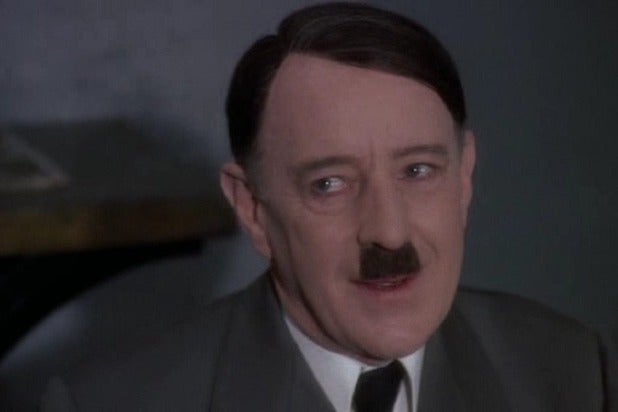 Paramount Pictures
Alec Guinness - "Hitler: The Last Ten Days" (1973) Alec Guinness was one of the first high profile actors to portray Hitler in the post-war period, and he stressed that he aimed to not do anything to make Hitler appear sympathetic in his performance, sticking to a British accent and just embodying his mannerisms. Though Guinness told The New York Times that he went nearly method to embody both the hate and senility that had sunk in during Hitler's last ten days of his life. "As an actor, I cannot possibly make Hitler a sympathetic figure. I can only make him human," Guinness said in an interview. "While the film is anti-Hitler, and while I'm most decidedly anti-Hitler, as an actor, I must see only Hitler's point of view. I'm afraid I'll be most hateful, and, as a precaution, I've asked the company to take out insurance against an attempt on my life. The think I'm being frivolous, but I'm not. It's for my wife's sake. The point is, I must present Hitler truthfully, else there is no point in playing him." 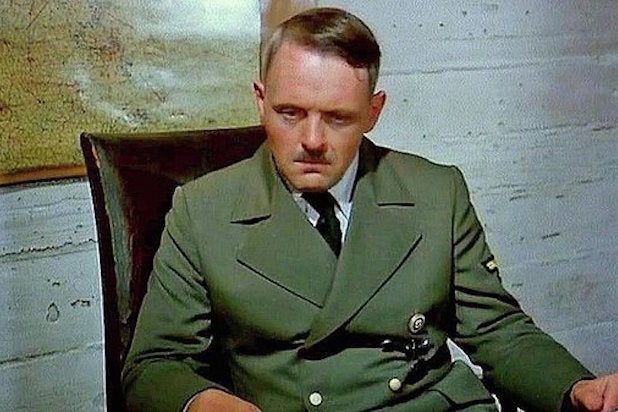 CBS
Anthony Hopkins - "The Bunker" (1981) Though he's more famous for his other villainous turn as Hannibal Lecter, Anthony Hopkins portrayed Hitler in his final days hiding in an underground bunker. "The Bunker" was a three-hour, TV movie event on CBS, and The New York Times said Hopkins' performance was "riveting" and "extraordinarily powerful." "Hitler is mad, often contemptible, but always understandable," the Times wrote. "He is not made sympathetic, exactly, but he is given decidedly pathetic dimensions, making him just that much more ''acceptable'' as a dramatic and historical character." 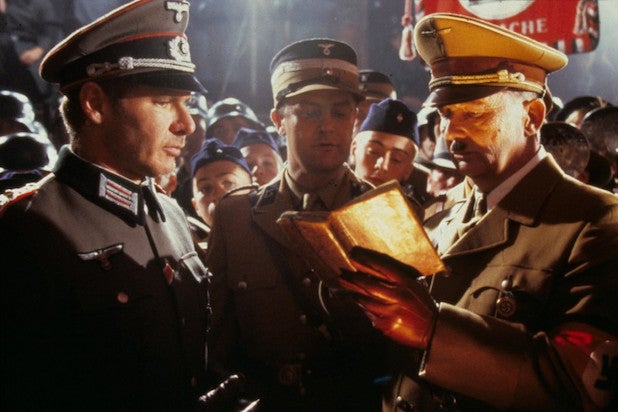 Paramount Pictures
Michael Sheard - "Indiana Jones and the Last Crusade" (1989) You don't get too many fun moments with Hitler in the movies, but this one from "Indiana Jones and the Last Crusade" finds Indy infiltrating a Nazi rally with the Führer in attendance, only to get caught in a crowd and find himself face-to-face with the tyrant. He thinks he's done for, only for Hitler to take a book from his hands and sign his autograph. 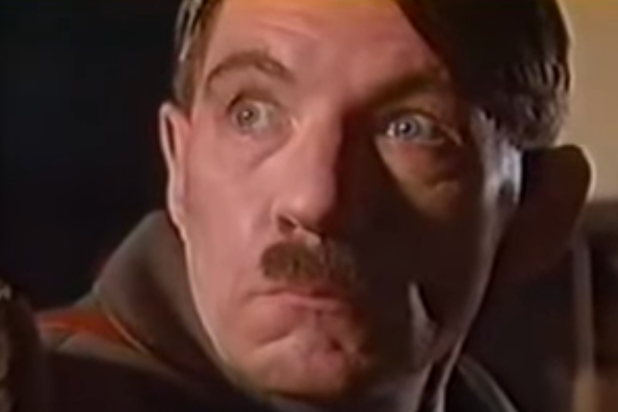 PBS
Ian McKellen - "Countdown to War" (1989) Before he played Magneto or Gandalf the Gray, British thespian Ian McKellen portrayed Hitler in this docudrama produced by PBS. It showed the build up to the war in 1939, including a dramatized moment in which Hitler has just learned that France and the U.K. jointly declared war on Germany. 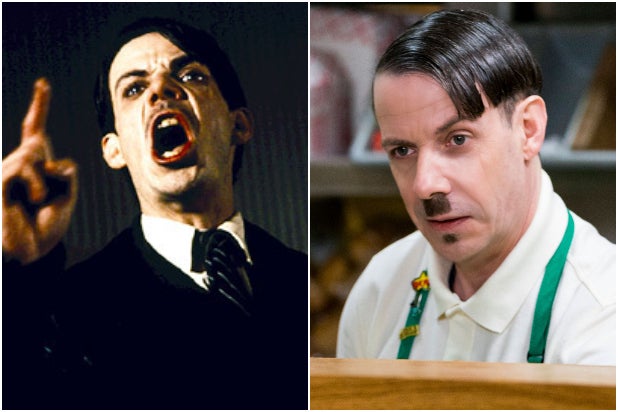 Lionsgate Films/AMC
Noah Taylor - "Max" (2002)/"Preacher" (2017) Noah Taylor is the one actor who had the distinction (fortune doesn't feel like the right word) of playing Hitler twice. His first stint was opposite John Cusack in "Max," which looked at Hitler's youth as a struggling artist and how Max Rothman coached Hitler and ultimately failed to get him to channel his rage to the canvas. Then when Seth Rogen and Evan Goldberg were casting "Preacher," they wanted a Hitler-type that was like what they saw in "Max," but ended up casting Taylor himself. It's a more satirical version of Hitler in which he's now escaped from Hell and is found working at a sandwich shop. 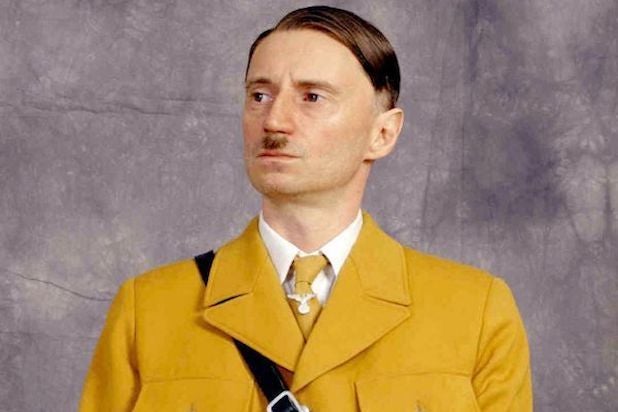 CBC/CBS
Robert Carlyle - "Hitler: The Rise of Evil" (2003) "The Full Monty" actor Robert Carlyle had never played a real-life figure before taking the role of Adolf Hitler for this Canadian miniseries that charted Hitler's growing influence within the Nazi party and Germany. Carlyle also stars in the miniseries opposite Peter O'Toole as Paul von Hindenberg. 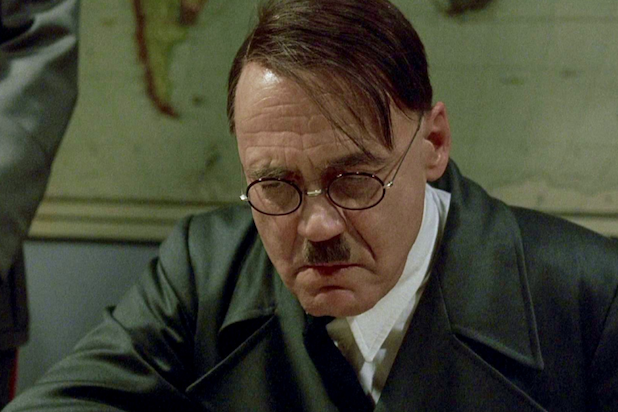 BBC Four
Bruno Ganz - "Downfall" (2004) His performance has become an endless meme as the Internet has found ways to invent their own subtitles and show Hitler reacting to just about anything, but Bruno Ganz gives a remarkable performance in this film about Hitler's final days. Roger Ebert called Ganz nearly unrecognizable as the German dictator, "hunched over, shrunken, his injured left hand fluttering behind his back like a trapped bird." 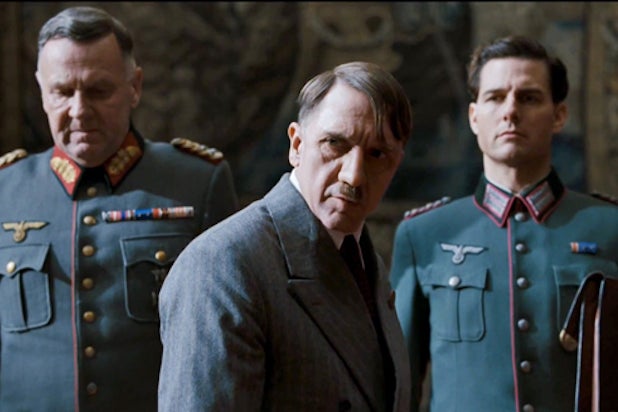 MGM
David Bamber - "Valkyrie" (2008) Tom Cruise stars as a loyal German officer staging an unsuccessful coup attempt by assassinating Hitler. David Bamber has a small but powerful role in Bryan Singer's thriller, talking about the need to understand the music of Wagner and lending his voice to a sinister and tense phone call late in the film as he demands to take all the traitors to the Nazi cause alive. 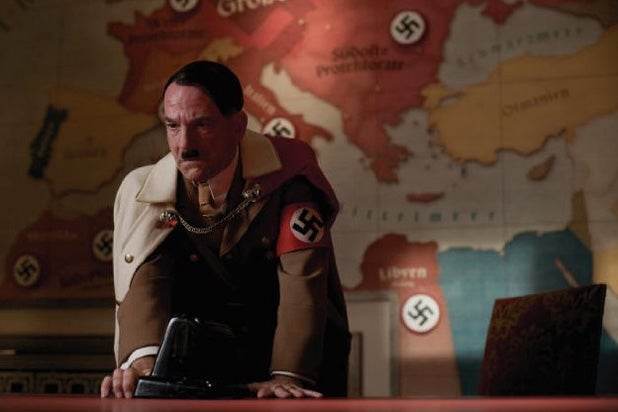 Universal Pictures
Martin Wuttke - "Inglourious Basterds" (2009) It's a brief but showstopping performance in Quentin Tarantino's "Inglorious Basterds," punctuated by Martin Wuttke pounding on the table screaming "Nein!" He's paranoid about the emergence of The Bear Jew marching through France. And though it's a broad performance, it feels scarily realistic. No spoilers, but it doesn't exactly end well for this Hitler in Tarantino's alternate history. 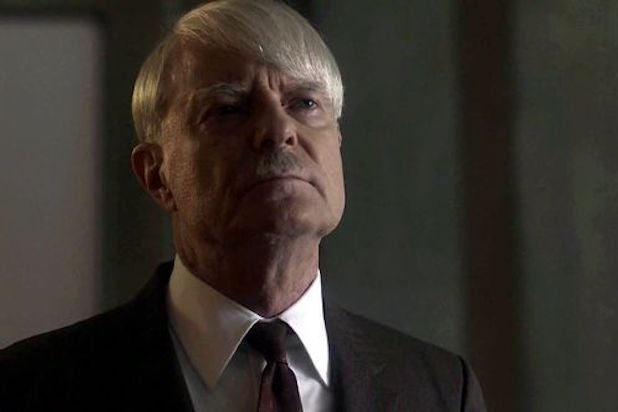 Amazon
Wolf Muser - "The Man in the High Castle" (2015) The first season of Amazon's "The Man in the High Castle" ended with a twist from Philip K. Dick's novel when it was revealed that the man in the titular high castle -- the person a resistance force against the Nazis had been passing secrets to -- was actually an elderly Adolf Hitler, as played by Wolf Muser. Except that wasn't the whole story, and it wasn't until the second season that we met the real man the title refers to. 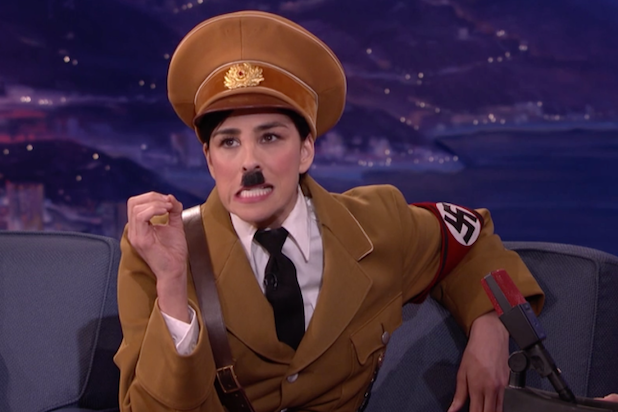 TBS
Sarah Silverman - "Conan" (2016) This one's fun. Conan O'Brien enlisted Sarah Silverman for a routine when then-Presidential candidate Donald Trump was frequently being directly compared to Hitler. Silverman's Hitler didn't take kindly to that comparison: "Don't get me wrong, I agree with a lot of what he says, like a lot, 90%, I'm like 'this guy gets it," "Hitler" joked. "Sometimes I watch him, and I'm like, 'Is that how people see me?'" 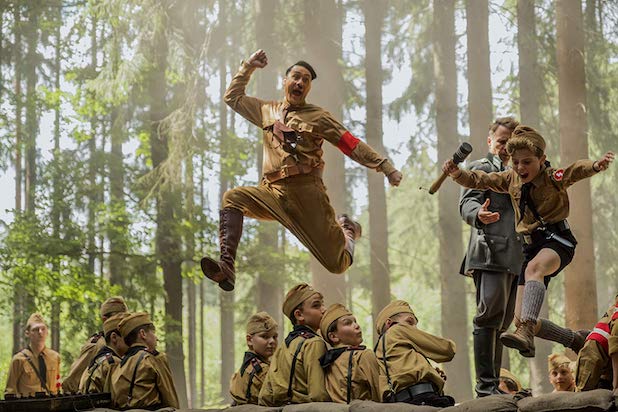 Fox Searchlight
Taika Waititi - "Jojo Rabbit" (2019) Waititi may be playing a broad satire of Hitler that's not unlike some of his other cornball character. But he descends into some scary depths as even this imaginary version of the Führer starts to threaten Jojo and flaunt his charismatic evil.
x
Looks like you're enjoying reading