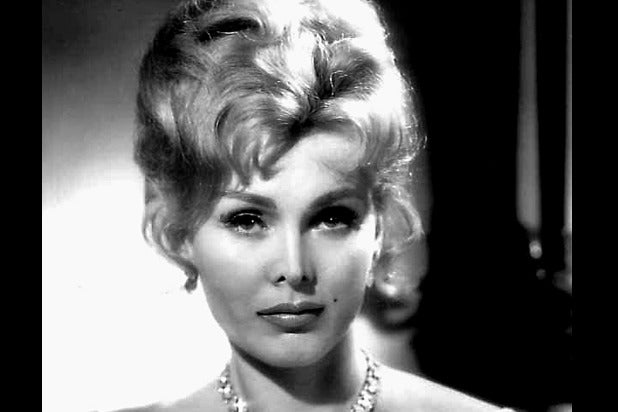 Zsa Zsa Gabor, a Hungarian actress and longtime Hollywood socialite, has died at the age of 99.

A publicist for Gabor, Ed Lozzi, told CBSLA that she passed away at her home on Sunday afternoon.

Gabor has been ailing and reported to be bedridden for more than five years.

She and her sister Eva were actresses and also famous Hollywood scenesters for several years, often garnering similar public commentary as do Kim Kardashian and her clan.

Born Sári Gábor in Budapest, Hungary, Zsa Zsa Gabor was the middle daughter of Jolie and Vilmos Gabor, a soldier. She followed sister Eva to Hollywood (where she starred in the 1960s sitcom “Green Acres”); their other sister, Magda, also became an actress.

Zsa Zsa, however, became more famous for being famous than for her acting. She did some TV roles and landed a few movie roles, starting with 1952’s MGM musical “Lovely to Look at.”

That year she also appeared in Fox comedy “We’re Not Married” with Ginger Rogers. Neither was a big part, however.

Her biggest role that year was opposite Jose Ferrer in “Moulin Rouge,” directed by John Huston.

Throughout the 1950s, she played supporting roles in movies including “Lili” and “Death of a Scoundrel.”

She also had numerous guest roles on TV, appearing on shows such as “The Dick Powell Theater,” “Gilligan’s Island,” “Bonanza,” “The Bob Hope Show,” “The Love Boat,” “The Facts of Life” and “The Fresh Prince of Bel-Air.”

She played herself on TV shows ranging from variety programs such as “The Joey Bishop Show” and “Rowan & Martin’s Laugh-In” to comedies like “My Three Sons,” “The Beverly Hillbillies” and “It’s Garry Shandling’s Show.”

Gabor also was a frequent and charming talk show guest, with her lilting voice and charmingly exotic accent. She appeared on “The Mike Douglas Show,” “The Tonight Show” with hosts Jack Paar and Johnny Carson, “The Merv Griffin Show,” “Late Night With David Letterman,” “The Rosie O’Donnell Show” and “The Ruby Wax Show.”

Gabor also was a frequent “square” on both the original incarnation of “The Hollywood Squares” and its revival in the late 1980s.

Gabor had a renewed burst of fame – or infamy – in 1989 due to the notorious “cop-slapping” incident in Beverly Hills. She was accused of slapping Beverly Hills police officer Paul Kramer in the face after he stopped her for a traffic violation. Gabor said she was provoked by the officer’s rude behavior; she also alleged he used obscenities to her.

After a much-publicized trial, Gabor was found guilty of assault; she was sentenced to 72 hours in the El Segundo, Calif., jail and ordered to pay $13,000 in court costs.

Gabor also was famous for her nine marriages, surpassing even the much-married Elizabeth Taylor.

Gabor once quipped, “I am a marvelous housekeeper. Every time I leave a man I keep his house.”

Her notable husbands included Conrad Hilton (1942-47), with whom she had her only child, Francesca Hilton (Paris Hilton is Zsa Zsa’s great-niece); actor George Sanders (1949-54), who reportedly inspired Zsa Zsa to become an actress; and her current husband, von Anhalt, to whom she has been married since 1986.

She also carried on a long affair with noted playboy Porfirio Rubirosa while wed to Sanders. (Sanders wed Magda Gabor in 1970; he committed suicide in 1972.) Gabor also was involved with Lt. General Rafael “Ramfis” Trujillo, son of the Dominican dictator.

Gabor survived her only daughter Constance Francesca Gabor, who died at the age of 67 in early January, 2015. She went by Francesca and was the only daughter of Gabor and Hilton Hotel founder Conrad Hilton.

In 2012, Francesca Hilton asked a Los Angeles Superior Court judge to intervene with her mother’s care with claims that Gabor’s husband, Prince Frederick Von Anhalt, mismanaged her finances and left her increasingly isolated from family and friends.

Von Anhalt denied Hilton’s accusations and remained in charge of her care.

Gabor suffered from a series of medical problems in recent years, including a broken hip and an infected lesion that resulted in the amputation of the actress’ right leg. Her prolonged hospitalizations had left her confined to bed.