Actress Jennifer Jones, who won the best actress Oscar for 1943’s "The Song of Bernadette," died Thursday morning at her home in Malibu. She was 90.

Jones died of natural causes, according to a spokeswoman for the Norton Simon Museum of Art in Pasadena. 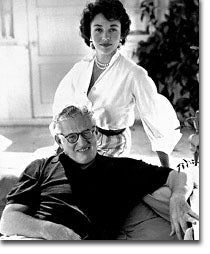 Jones had long been connected with the museum because of her marriage to industrialist Norton Simon; she had overseen the museum since his death in 1993.

She also was married to actor Robert Walker and to movie mogul David O. Selznick (pictured left with Jones), who saw something special in her screen test and helped make her a star.

Jones was born Phylis Lee Isley in Tulsa, Oklahoma. She studied at Northwestern University and at the American Academy of the Dramatic Arts in New York, where she fell in love with another young aspiring actor, Robert Walker.

Jones found work modeling and on the radio, but wasn’t satisfied. She finally succeeded in landing an audition at the Selznick Studios.

Although she thought it didn’t go well, David O. Selznick disagreed and signed her to a contract, changing her name to Jennifer Jones.

Selznick cast Jones as the lead in "The Song of Bernadette," for which she won the Oscar on her 25th birthday.

That success led to a string of well-received performances in films including 1944’s "Since You Went Away," a WWII story for which she earned a supporting actress Oscar nomination, and three movies for which she was a best actress nominee: "Love Letters" (1945), "Duel in the Sun" (1946) and "Love Is a Many-Splendored Thing" (1955).

However, her career started a downturn, exacerbated by Selznick’s death. In 1967, she was found by police at the bottom of a cliff in Malibu, where she apparently had collapsed after taking sleeping pills and drinking wine. She later said it was not a suicide attempt, but that was what it seemed at the time.

She retreated from Hollywood, focusing on raising her and Selznick’s daughter and working with the Manhattan Project, a group of Salvation Army residential treatment facilities for young people addicted to narcotics.

She met recently divorced millionaire industrialist Norton Simon at a party in May 1971. He said later that they connected because of her activism. They were wed soon thereafter and were together until his death in 1993.

Simon introduced Jones to the joys of art collecting and museums; she introduced him to India and yoga, influencing his decision to collect art from that region. She became integrally involved in the administration of the Norton Simon Museum of Art, especially after Simon became ill; he named her president of the museum and, after his death, she became chairman of the Norton Simon Foundation Board.

In addition to sitting on the board of the Norton Simon Museum, in 1980 she donated $1 million to establish the Jennifer Jones Simon Foundation for Mental Health and Education.

The museum spokeswoman said Robert Walker Jr., one of Jones’ two sons with her first husband, was at her side when she died. Her other son, Michael Walker, and daughter Mary Jennifer Selznick, predeceased her.