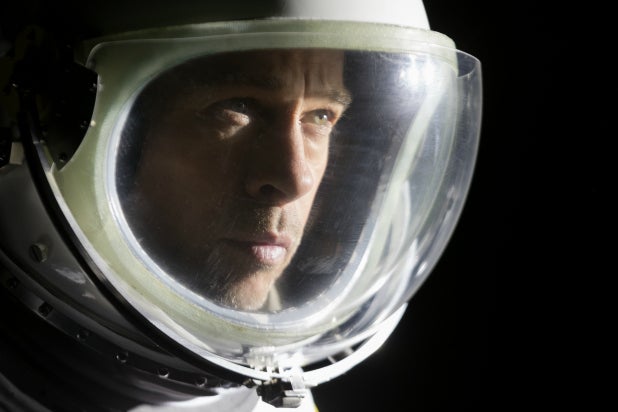 Is Brad Pitt’s character in “Ad Astra” a sociopath? That is the nagging question after watching director and co-writer James Gray’s remarkably stylish and fascinating space drama, which follows astronaut Roy McBride (Pitt) on a mysterious trek to the edge of the solar system to find his estranged father, Clifford (Tommy Lee Jones).

At its core, “Ad Astra” is a family saga about a man grappling with the person he’s become by way of an increasingly intense desire to reconnect with his astronaut dad who abandoned him, the man whose otherworldly curiosity far superseded his paternal ambition. Clifford is more of a figment than an actual person in Roy’s eyes — a man who by default is heralded because he dared to go where no other had gone before, regardless of the casualties along the way (among them, his relationship with his son). But Roy, a man whose conflicted emotions are confined to internal monologue (exposed in Pitt’s consistent voiceover), is looking for answers that are not entirely Earth-based.

Gray (“The Lost City of Z”) and co-writer Ethan Gross’ (“Klepto”) intriguing decision to make Roy’s emotional impotence a professional mandate further complicates the story: On one hand, he’s supposed to be distant from people because his job requires routine psychological testing that monitors his ability to maintain a flatlined emotional state, but on the other, Roy is a human and lives on Earth, where people like his wife, Eve (Liv Tyler), a character so marginalized she’s often reduced to a blurry image on screen, have to bear the brunt of his aloofness.

It’s a strange quality that begs the question of his humanity, suggesting he’s been trained, both familially and professionally, to divorce himself from empathy on the brink of what becomes a calamitous mission.

That more malignant motivation is tightly intertwined with the seemingly benign plot, which focuses on Roy’s quest to determine whether his dad — whom no one, with the exception of his fellow crew members on board the fateful Lima, has seen for at least a decade — is still alive. This kind of personal journey either to escape or to find oneself can be seen in many other (mostly masculine) films in the genre, including “Contact,” “Gravity,” “First Man” and “Armstrong.” But in “Ad Astra,” this crusade seems to be a double-edged sword that deconstructs the very idea of a male hero.

Using space, and by consequence time, to remove Roy from his home and deeper into solitude, Gray and Gross’ narrative comes into sharper focus through Hoyte Van Hoytema’s (“Dunkirk”) immersive cinematography that drops the audience in the center of unnerving pitch-blackness. As Roy embarks on this mission to the depths of the galaxy, he contends with frightening circumstances, including faceless enemies and uncontrollable creatures who eliminate his team members, sending him reeling into darkness alone. But Roy doggedly pursues his mission even while suddenly gripped with an uneasiness he’s unable to verbalize.

That’s one of the most compelling facets of Pitt’s performance; he blurs the line between fear and precision so easily that it’s a haunting experience. Similar to his recent work in “Once Upon a Time…in Hollywood,” Pitt is at once an affable hero and a danger to himself and others, seemingly without acknowledgement or malice, but who can know for sure?

That’s the complexity of Roy’s presumed sociopathy, a mode he refers to as “sins of the father” in a foreboding aside. It’s a rage he says he passively understands but never confronts. He lacks the accountability to even try. What’s even more chilling, though, is that the audience doesn’t really expect him to. By this point in the film, we want what he thinks he’s looking for: closure. We become so wrapped up in Roy’s broken relationship with his father, however, that our interpretation of his actions could easily be skewed.

Watch Video: 'Once Upon a Time in Hollywood': Margot Robbie, Brad Pitt, and Leonardo DiCaprio Prank 'Kimmel' on Way to Premiere

As Roy follows his dad’s previously chartered journey, the alarming truth of what happened to Clifford and his own team crystallizes. But as disturbing as that is, Roy remains programmed to the original mission and therefore must see it through. Though there are no real sentimental flashbacks to Roy’s childhood — the few that there are serve provide more visuals than context — Pitt allows us to see a glimpse of the conflict he’s contained for so long on his face. But it’s just for a moment.

This film is brilliantly cast by Douglas Aibel (“After the Wedding”), with Jones delivering one of his best performances in years as a man so utterly dislodged from reality that he regards an unearthly abyss as his true home. He’s unforgiving, morose and terrifying at the same time.

The line between heroism and villainy has always been a fine one. In “Ad Astra,” that comes down to what we know and what we accept, whether that is a hollowed man desperate to reunite with his father or a man who allows his increasingly dubious ambitions to threaten the lives of everyone around him. Both Roy and Clifford suffer from the same hubris, but we feel empathy for only one of them.

So to answer the first question — is Roy a sociopath? — the answer may depend on who’s asking.