If you’ve been wondering where all the young TV viewers have gone when they don’t have cable but are up to date on “The Walking Dead,” a new study from creative agency Anatomy Media might have the answer. And the potential cost to TV networks and studios could run into the hundreds of millions.

According to Anatomy’s survey of 2,500 Americans age 18-24, 69 percent use some form of video piracy on a regular basis.

It gets worse: 61 percent of those young millennials share a password to a video subscription service with family or friends.

But worst of all, perhaps, is that because they visit piracy sites with invasive and possibly malicious ads, much more of this demographic is using ad blockers than the U.S. population at large — 63 percent of the respondents said they use an ad blocker on at least one device. (Online advertising researcher eMarketer estimates about 26.3 percent of all Americans are ad blockers.) 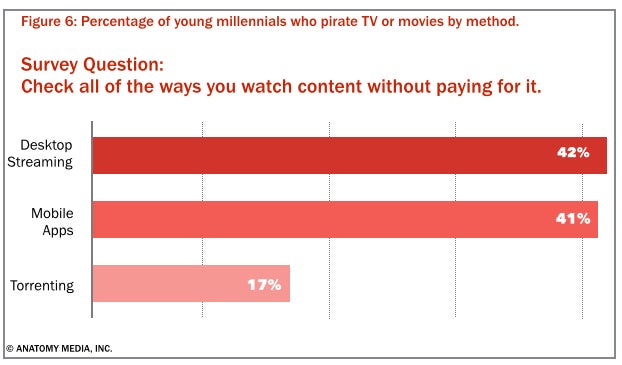 Anatomy’s study found a strong correlation between streaming piracy and ad blocking, and hypothesizes that the two behaviors are reinforcing.

Generally, ad blocking has been a concern for publications like The New York Times or Forbes. But ad blockers work on video players, too — and the Anatomy study found that 64 percent of young millennials actually install an ad blocker specifically to avoid ads on videos.

Anatomy co-founder and CEO Gabriella Mirabelli told The Wrap this points to ad-supported networks, digital and traditional, possibly losing out on millions in revenue because most of them aren’t using an ad block wall, technology that denies access to those using an ad blocker.

“Think about the Olympics on NBC,” Mirabelli told The Wrap. “We kept testing it to see if they had an ad blocking wall, and, nope. You could watch all their stuff and never see an ad. That’s where two-thirds of their missing millennials went.”

Indeed, Anatomy conducted tests on the major broadcasters’ streaming sites and found that Fox, ABC and NBC allow you to watch their videos with an ad blocker activated — CBS was the exception among the broadcasters, asking users to turn off their ad blockers in order to view content. Most cable sites that Anatomy tested, including Viacom’s Spike and A&E’s Lifetime, also allowed ad blockers full streaming capabilities.

“You know who has ad block walls? Some of these streaming piracy sites,” Mirabelli said. “So they’re profiting doubly at the expense of the network, in some cases.”

The impetus for the study came when Mirabelli caught her two teenage sons illegally streaming shows and ad blocking, and in her admonishments discovered they didn’t know they were doing anything wrong.

Most of those in the 18-24 demo don’t even think it counts as piracy if they’re merely streaming a TV show or movie instead of downloading it onto their computer or phone. And just 18 percent of them believe that streaming video without paying for it is wrong.

“They view the streaming site as the party doing the wrong thing, and they’re just witnesses,” Mirabelli explained. She likes to call these scofflaws “striminals,” a portmanteau of “streaming” and “criminals.”

So how does the entertainment world set these youngsters on the right path?

First, by putting up those walls that don’t let them watch content while using an ad blocker.

The next step is a little harder: making sure the ads the viewers experience are relevant, varied and not awful. “If you’re going to force people to turn off their ad blocker, you damn well better make sure their ad experience is just as premium as the video,” Mirabelli said.