First, the good news: Judy Greer has the lead in a movie.

Now, the not-so-good news: That movie is “Addicted to Fresno.”

If you’re resistant to laugh-track yucks, this comedy that revolves around a dead body and lessons learned is likely unappealing. Given significant slack, however, “Fresno” does have its charms, thanks in no small part to Greer — for once, not stuck in the small role of best friend or put-upon wife — and her co-star, Natasha Lyonne.

Lyonne herself is experiencing a renaissance thanks to her role in the lauded Netflix series “Orange Is the New Black,” returning to the comedic roots of her 1998 breakout, “Slums of Beverly Hills,” after a big-screen absence reportedly brought about by personal problems. Perhaps in honor of her previous role, Lyonne wears her “Beverly Hills” character’s same out-of-control ponytail as Martha, sister of Greer’s Shannon.

Whereas Martha’s got it together — owning a house, for instance, and maintaining a steady job, albeit as a motel maid in much-maligned Fresno — Shannon is just out of rehab for her sex addiction and relapsing hugely while crashing with Martha. Martha gets her sister a cleaning gig of her own, and it’s during one of Shannon’s weaker moments that she, whoops, kills a scumbag motel guest.

Now the siblings have a big, hairy body to deal with. Panic! What to do? Cover it up, of course, in the wackiest way possible, all in the name of sisterly bonding.

See Video: SXSW: Judy Greer on Playing A 'Not Sociopathic' Anti-Hero in 'Fresno' 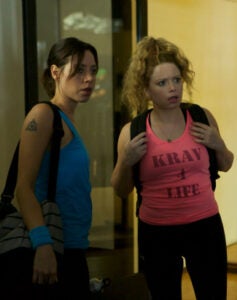 “Addicted to Fresno” also features Aubrey Plaza, whose character is a bitchy fitness instructor interested in Martha; Malcolm Barrett (“Better Off Ted”) as a poet who might change Shannon’s ways; and Edward Barbanell, an actor with Down’s syndrome, playing Jerry, Martha and Shannon’s boss. If the film succeeds at nothing else, it’s got diversity down: Martha’s lesbianism is never highlighted nor underlined, Shannon is open to interracial romance, and Jerry’s the film’s most level-headed character, even giving Shannon some much-needed advice.

The laughs are mild, but at least some exist. The highlight is a bar mitzvah in which the kid of honor jumps on a stage and, after thanking his mom, dad, and “Bubbie,” proceeds to rap about things that, in a lazier comedy, would make Bubbie pass out. The sequence also features a funny seizure, if you allow yourself to believe there is such a thing.

Greer, meanwhile, proves that she’s got the range to be a headlining star. She’s mostly been allowed to show off only her comedic chops over the course of her considerable career, but in films like “The Descendants,” Greer has demonstrated a skilled ability to go deep, dark, and affecting. OK, Shannon quite obviously dry-cries in one scene, but in a monologue at a 12-step meeting, Greer adds a layer of poignancy to what heretofore had been a parade of hijinks. “The pain of doing it is not as bad as the emptiness of not doing it,” Shannon tells Martha as a way of explaining her addiction, a line to which even non-addicts will likely be able to relate.

By the film’s third act, you’ll have forgotten that Shannon accidentally killed a man. Greer and Lyonne work as sisters, with an easy and occasionally caustic back-and-forth adding to their shared red curls. It’s difficult to shake off Lyonne’s cynical “Orange Is the New Black” character and regard her as the optimistic one of the siblings — she gets as many tart one-liners as Greer — but it’s not really Martha’s story anyway. The wrap-up of “Addicted to Fresno” is too facile to be believable, but considering the film’s premise, it’s a miracle that the movie works at all.