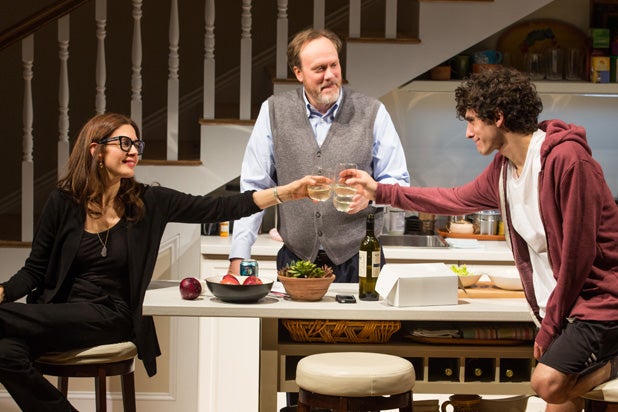 If you don’t have kids, Joshua Harmon’s new play, “Admissions,” will make you happy that you don’t. Going through the college-admissions game once is bad enough, much less multiple times with your offspring.

Harmon has actually written two plays and put them under that one title, “Admissions,” which opened Monday at LCT’s Off Broadway Mitzi E. Newhouse Theater. One play is about the trauma of a smart young prep-school student who doesn’t get accepted to Yale. The other is about the tragedy of the boy’s parents, who have invested way too much in their son’s future and can’t extricate themselves from his life. In the end, he will be fine. The parents, on the other hand, will probably never recover.

Harmon’s prep-school student deals with being rejected by Yale worse than most. But then Charlie Luther Mason, played with astonishing verve by Ben Edelman, has the added disadvantage of being the son of the two educators who run the prep school he attends.

Sherri Rosen-Mason (Jessica Hecht) and her husband, Bill Mason (Andrew Garman), have spent their careers in education attempting to make New England’s tony Hillcrest School a more racially diverse institution. They’re proud when one of Hillcrest’s biracial students, who happens to be their son’s best friend, gets accepted to Yale. But concurrent with that good news is word that Charlie didn’t make the cut. Actually, he has been deferred.

Before Sherri and Bill get a chance to process their disappointment, Charlie unloads on them in a fierce monologue about white upper-class privilege in which he is not only more worthy of acceptance to Yale than his biracial best friend but also more deserving of the editorship at the school paper than its current female editor-in-chief. Equally fierce but much funnier — it’s a very long monologue-tirade — is Charlie’s interpretation of “people of color,” a category, he feels, that should not include Latinas from Chile who are the descendants of colonialists from Spain. But most hilarious is his take on how Jews like himself, who used to be excluded from Ivy League schools, are now lumped together with “whites” so they can again be excluded from those same universities by a quota system seeking to achieve his parents’ fond dream of racial diversity.

The father responds by calling his son a racist. Bill’s speech isn’t nearly as long as Charlie’s, but almost as funny. As a writer of great one-liners strung together, Harmon is a pro. As a dramatist, however, he may have misjudged here. Bill’s put-down is so brazen it’s impossible to believe this man’s career involves speaking to teenagers on a daily basis. Frankly, it’s the way a Barry Diller might talk to a disgruntled VP who’s about to be fired. Regardless, Garman delivers the speech with great no-nonsense panache.

As a director, Daniel Aukin goes for the big performance, and that works with Edelman, Garman and Ann McDonough, who plays a put-upon school apparatchik who can’t find enough students of color to put in the catalogue. He’s less successful with the nearly hysterical performance of Sally Murphy, the biracial student’s mother.

Amid all this onstage fury is Hecht, the true center of the storm. The mother is much more circumspect in her approach to rejection than the rest of her brood. Sherri has clearly gotten her way at Hillcrest and at home by wearing people down with her dogged good manners and honeyed patronizing grace, and Hecht doesn’t make a gesture or deliver a line that hasn’t been carefully calibrated and considered before being dispensed.

Ultimately, Charlie makes his parents an offer about continuing his education beyond prep school that they have to refuse, since it pits their personal ambition for their son against the liberal goals of their twin careers in education.

The tragedy isn’t that they end up being compromised. The tragedy is that they’re incapable of thinking outside the box, because they’ve been stuck in the box of the classroom for their entire lives. They can’t imagine a world without grades, grants, tests and scholarships. The mother’s definition of success, especially, is narrow to the point of claustrophobia: If her son doesn’t go to Harvard or Yale, he won’t grow up to be a Supreme Court justice. Educators are meant to inspire, but how can you inspire if you’ve never ventured outside the classroom?