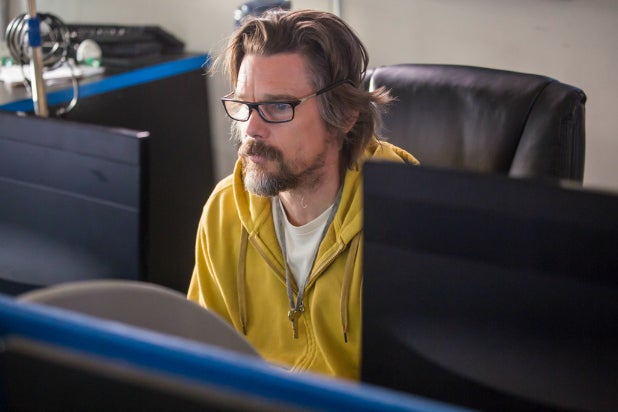 Ethan Hawke (“First Reformed”) is a master at the art of playing the unassuming everyman battling life’s greatest challenges. But his latest great performance is not enough to boost writer-director Logan Marshall-Green’s (“Upgrade”) meandering new film, “Adopt a Highway,” in which he stars as an ex-convict who’s finally gained his freedom after serving a 21-year jail sentence.

Russell Millings (Hawke) is experiencing a lot of change right now. He’s got a new job at a restaurant, he’s just discovered the wonderful invention of the World Wide Web and he’s sleeping in a normal bed for the first time in over two decades. It’s awkward yet joyous time for the now middle-aged man who was imprisoned for possession of narcotics (marijuana, to be exact) with the intent to distribute. In many ways, Russell has always been a happy man who keep finding himself in messed up situations and making the wrong decisions.

This is ripe for comedy despite the film’s morose tone mostly because Hawke has a whole fish-out-of-water vibe going on, complete with his signature fanny pack and droopy expression whenever he is trying to navigate anything involving a computer. Even before the story begins to really unfold, Hawke is giving us a fully formed character worthy of empathy, if only because he went to jail on account of an offense that is now on its way to being legalized. “You’re not even black,” says a front desk clerk when he tells him about his jail stint, alluding to the disproportionate rate of black people who go to jail for pot over white people. Russell responds with silence and a blank face, as if to say, “Yeah, well.” None of the irony is not lost on him, but he doesn’t have the energy to react to it.

Russell’s misfortunes are just a way of life for him and what he tries his hardest to keep in the past, as his parole officer (Chris Sullivan, “This Is Us”) sternly reminds him in the beginning of the film. Just go to work and go home. That’s it. But when he discovers a baby in the dumpster behind the restaurant one night, one small choice pivots his life in a whole new direction (and sets off a chain of strange plot choices).

Despite the fact that he is on parole, Russell decides to take in the baby, even though he knows nothing about babies or baby food or baby safety (which becomes painfully obvious right away). All he has is the duffel bag that he found her in and a note that reads, “Her name was Ella.” But, whether it was driven by his loneliness or a need to have a sense of adult responsibility, Russell takes care of Ella for a few days, becoming the first real friend he’s had in years, until she falls off his bed and bumps her head and he has to take her to the hospital. She’s not only taken away from him, but he gets caught in a lie about just finding Ella that morning and bringing her straight to the hospital, jeopardizing his parole.

This triggers an unfocused, and at times unbelievable, series of events involving Russell deciding to risk consequences and go back home to Wyoming to reconnect with who he was prior to prison. Hawke manages to make it interesting to watch a wilted man who can go from joy to despair to numbness within a few short moments, with the difference only being a hesitant jagged-toothed smile. Russell is free yet remains tethered to a system that is ready to imprison him at any moment. He wants to experience life but doesn’t really know what that means or how to navigate it.

At its core, “Adopt a Highway” is about choices; the choices that the justice system makes and Russell’s own — both good and bad and with or without the best intentions. Freedom is supposed to beget choice, but once Russell is released from prison and met with numerous choices, he finds himself at the risk of being incarcerated once again. Though Marshall-Green makes the inspired decision to pivot from that potentially grim narrative that so many characters have fallen prey to before, it’s a bit of a ramble until the end of the film. Perhaps that’s his intention: Russell is still trying to figure out who he is now and what choices he wants to make moving forward. But as a film, that needs to be a bit more concise and to the point.

Marshall-Green’s directorial debut is an intriguing story centered on a flawed protagonist, and with more polishing in the second half of the film it could have really sailed. Though Hawke’s engrossing performance and composer Jason Isbell’s (“A Star Is Born”) serene score are worth a watch, “Adopt a Highway” comes off as flat as it is earnest.