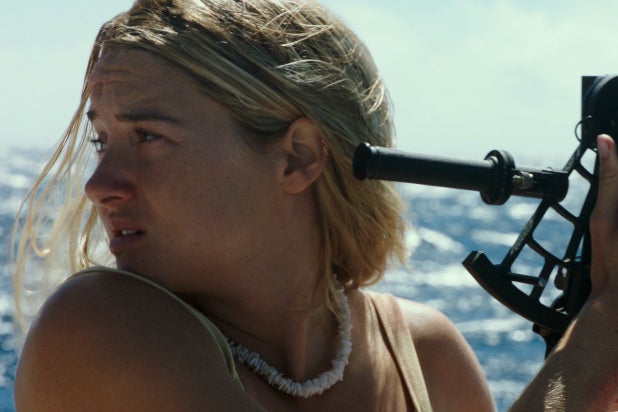 Hollywood has had a fairly predictable approach to the combination of boat, sun, sea and starlet, and that is to emphasize skin over substance, and leave the derring-do to the men. But that equation has been getting reworked of late, and the endurance grit of women has edged to the forefront. There are, of course, the shark ordeals both real (“Soul Surfer”) and popcorn-flavored (“The Shallows,” “47 Meters Down”), the gender-equal action ethos of James Cameron (“The Abyss,” “Titanic”), and Disney’s sumptuously empowering Polynesian girl adventure “Moana.”

But the one genre that’s eluded showcasing a strong woman is the lost-at-sea yarn, which has given us memorable adventures in this young century for Tom Hanks (“Castaway”), Robert Redford (“All Is Lost”), and an Indian boy paired with a digital tiger (“Life of Pi”), while largely avoiding stranding a female in open waters for an existentially punishing length.

Until “Adrift,” that is. The poster, which features Shailene Woodley and Sam Claflin beatifically touching foreheads, would have you think it’s a rays-and-sprays love affair gone wandering. And yes, it’s a romance, but the title is also literal.

The story is a true one, based on the incredible saga of Tami Oldham Ashcraft: In 1983, at the age of 23, she left Tahiti with fiancé Richard Sharp on a yacht they’d intended to sail to San Diego, only to get caught in a nasty hurricane that forced Ashcraft — the only one physically capable after the initial impact — to keep the damaged craft afloat for 41 days. (Ashcraft wrote a memoir of their experience, from which the movie is based, called “Red Sky in Mourning.”)

Woodley is the film’s boating hero, but behind the scenes it’s manned, pardon the pun, by disaster-survival specialist Baltasar Kormákur, who last gave us the mountain-peril epic “Everest,” and previously waded into shipwreck territory with his Norwegian fisherman drama “The Deep.” Here, he’s well-primed to combine white-knuckle seafaring scenes with swooning stars and picturesque locations, but there’s a choppiness in the overall dramatic pull that — despite the surface appeal of the stars and Kormákur’s and cinematographer Robert Richardson’s visuals — keeps “Adrift” from making true waves.

A gripping opener shows promise, however, with Woodley’s Tami waking from unconsciousness to be confronted with a flooded yacht, a broken mast, a missing boyfriend, and a view of only horizon, water, and sky. From there, the screenplay by Aaron and Jordan Kandell and David Branson Smith jumps back five months to when Tami was an itinerant Southern California surfer gal flitting around the South Seas doing odd jobs, and Richard a charming, well-traveled British sailor who, upon meeting Tami, sees a kindred spirit when it comes to tackling life as an adventure.

Woodley, whose vibe has always been an appealing combination of awkward independence and golly-gee hippie, naturally needs to do little to convince us that her Tami is both energized by traversing the seas with a new love and skittish about anything resembling an obligation or a return home. Both those emotions certainly come into play when Richard accepts an offer from a friendly English married couple (Jeffrey Thomas and Elizabeth Hawthorne) to sail their yacht from Tahiti to San Diego for a sum that could finance a lot of romantic travel. But togetherness wins out until, a couple of weeks into their journey, Hurricane Raymond makes it an unwelcome threesome.

Perhaps fearful that audiences wouldn’t want a movie split evenly between budding romance on the front end and waterborne psychodrama past the halfway point, “Adrift” opts for a chronological toggling between the happy build-up — meeting cute, dining cuter, sailing cutest — and scenes on the wrecked Hazana in which Tami must overcome fear and doubt to steer her and a severely wounded Richard to safety.

But the gimmick also acts as something of a sentimentalized crutch, especially when there’s genuine drama in watching Tami making repairs, swimming for food, learning how to use a sextant — in other words, realizing her life-saving potential as the captain of her own destiny.

But when the real reason for the narrative structure of “Adrift” is revealed at the end — hinted at early in the film for the eagle-eyed, and which won’t be news to anyone familiar with Ashcraft’s story — there’s bound to be as many eyes rolling upwards as shedding tears. Twists have already become an overused tool in thrillers and horror movies; heaven help us all if they start invading romances, much less true-life tales with already breathtaking elements that don’t need a screenwriter’s augmenting.