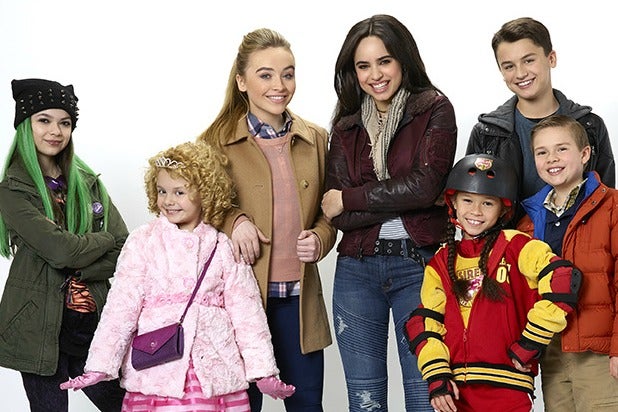 The No. 1 rule in babysitting is never take your eyes off the kids.

Viewers will have no problem sticking to this code of conduct when the rebooted “Adventures in Babysitting” premieres Friday on the Disney Channel. A remake of the 1987 teen comedy, this Disney version shakes up things in a lot of fun and modern ways.

In the original, for instance, Elisabeth Shue‘s suburban character Chris and her charges experience an endless array of mishaps while trying to save Chris’ friend in the big bad city of Chicago. But in this version, two babysitting rivals (Disney stars Sabrina Carpenter and Sofia Carson) have to travel from the suburbs of Seattle to rescue Trey (Max Gecowets), one of the kids they were supposed to be watching until he sneaks out to go to a concert.

Au courant cell phone mix ups and references to digital photography and GPS navigation move the story along in small ways but are not as important as the modernized and sophisticated way both of the movie’s leading ladies are portrayed. Carpenter (“Girl Meets World”) is winsome and believable as Jenny, an overachiever with big dreams for her future. She’s also really good with kids and cares about their well-being despite a misstep or two.

Carson (“Descendants”), who is very believable as Lola, is the exact opposite of Jenny. She’s a little older and a lot wilder and fails to see the importance of college — or at least that’s what she says. Lola doesn’t set out to be a babysitter but a mounting parking ticket problem makes the job a much-needed revenue stream. Along the way — this is Disney after all — Lola learns that she actually likes children and has an unexpected knack for relating to them.

What makes Jenny and Lola so likable is that they are resilient, brave and fully realized in ways the teenage girls in the nearly three-decade-old original were not. Sure, they like cute guys and makeup and all of that but there is a lot more depth and intelligence to which viewers can relate.

Also Read: 'Girl Meets World' Creator on Show's Biggest Storyline: 'This Could Not Possibly Be a Love Triangle'

The younger kids — three of whom are biracial — are also well-rounded and include a glamour queen (Mallory James Mahoney), an aspiring chef (Jet Jurgensmeyer) and a roller-derby loving tough girl (Madison Horcher). Although Mahoney’s look veers too close to JonBenet Ramsey territory, the little actress turns her character Katy into so much more than a pageant girl. Gecowets’ Trey and Nikki Hahn’s Emily are tweeners who sulk a little more than they should but also turn out to be characters worth liking.

The only shortcoming of note in this re-imagined “Adventures in Babysitting” is a rap battle between Jenny and Lola. In the first movie, the kids were forced to perform a blues number. The writers should have gone with the blues or any genre other than rap because these youngsters have, um, noticeably limited rap skills. Plus, the scene in general is as implausible as it is unnecessary and that’s saying a lot in a small-screen offering full of happenstance and high jinks.

But when it comes to small-screen choices the whole family can watch this summer, you’d be hard pressed to find anything more exciting, funnier, sweeter and more racially diverse than “Adventures in Babysitting.” What a worthwhile reboot.

“Adventures in Babysitting” premieres Friday June 24 at 8 p.m. ET on the Disney Channel.