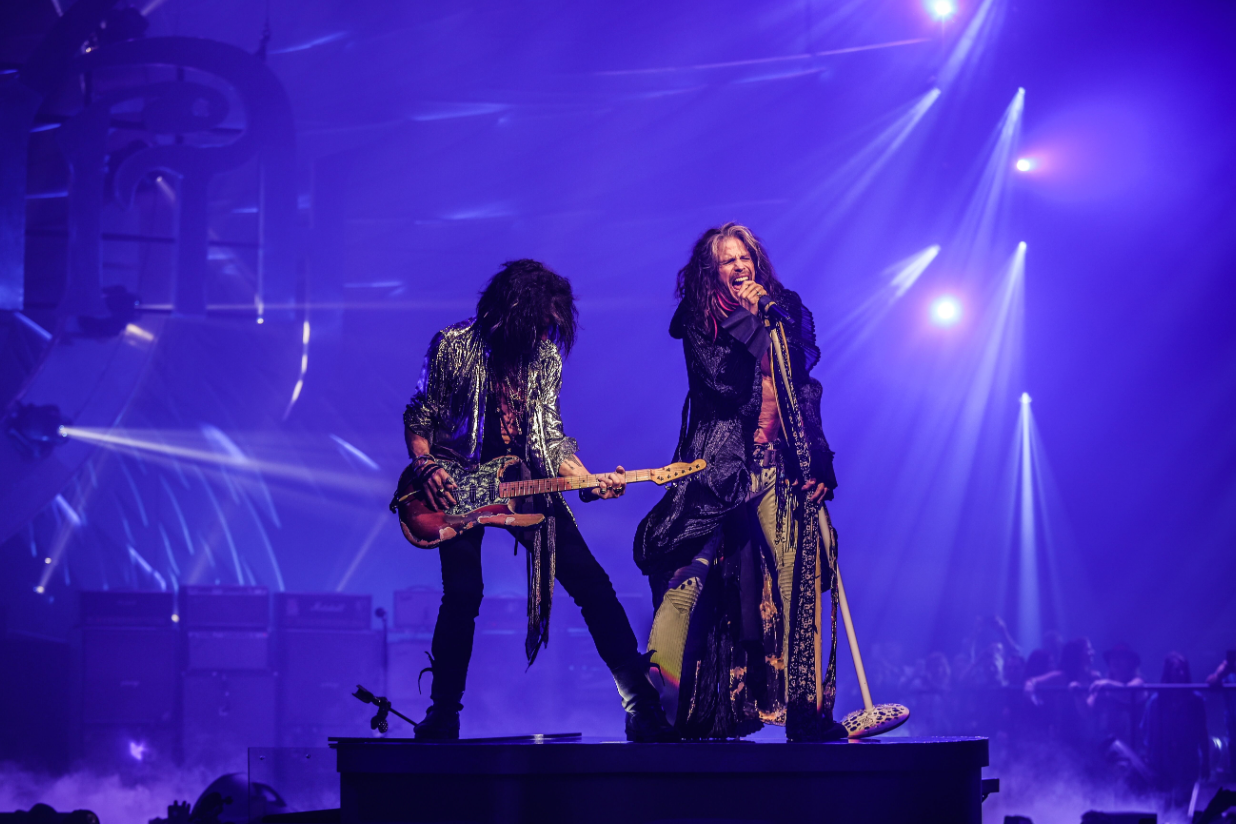 Steven Tyler started Aerosmith’s Las Vegas residency Saturday night by stalking cartoonishly onstage dressed in a flowing, pajama-like outfit, as if the cheers of the crowd had woken him up and now he needed to kick a whole casino’s ass.

Which he did. By the end of the show, the 71-one-year-old was shirtless and ripped, setting extremely unattainable goals for most people in AARP. He and his bandmates leaned hard into their age Saturday, and were better for it. Tyler, guitarists Joe Perry and Brad Whitford, bassist Tom Hamilton and drummer Joey Kramer took pains to remind people that they’ve been at this, with a couple of breaks for fights and rehab, for close to 50 years.

“What the f— are you sitting down for?” Tyler said early in the show, shaming an audience member in the front who had the audacity to… sit. “Get the f— up. This is Vegas.”

Making the most of a stellar THX-certified L-ISA sound system within the Park Theater at the Park MGM, the band tore through their back catalogue with little-to-no pandering to any casual fans in attendance. They started with one of their oldest songs, a cover of Tiny Bradshaw’s “Train Kept A-Rollin’,” then tore into more ’70s classics, “Mama Kin,” “Back in the Saddle,” “Kings and Queens” and “Sweet Emotion,” and then settled into  1987’s  “Hangman Jury” and 1974’s “Seasons of Wither.”

None of these are exactly lost tracks, but any “American Idol” fans expecting a collection of more recent hits had to wait a while.

Aerosmith made it delightfully clear, right up front, that they’d be doing Vegas on their terms. Before they played a note, the show began with a half-hour film that went deep into the band’s history, accompanied by images of relics like 45s and cassettes. We heard about Perry’s early love of Jimi Hendrix, the time Tyler wandered down a path called “Groovy Way” while tripping on LSD, and his formative years at Lake Sunapee, New Hampshire. For the Boston die-hards, we even got to see old maps of the train routes in the band’s adopted hometown.

I’d never seen a Vegas show prior to Saturday’s concert, and expected something more middle-of-the road and obvious. The band seems to be treating their 30-plus “Deuces Are Wild” Vegas shows as a surprisingly intimate retrospective. It’s a treat to see a band so accustomed to stadiums playing in a comparatively small 5,200-seat theater. At some points the show felt like visiting a friend’s basement to go over some old favorites, warmed by the soft hum of an amplifier.

Other times, it felt very Vegas. Demonically cherubic stuffed animals lowered from the ceiling for a soaring take on “Toys in the Attic” that got us as close as an Aerosmith show will ever come to one by Pink Floyd. “Cryin'” and “I Don’t Want to Miss a Thing” aren’t my favorite Aerosmith songs, but the band played them tightly, with passion, and connected with most of the crowd in a massive way.

And then there’s the big silly songs, “Love in an Elevator” and “Dude Looks Like a Lady.” They’re kind of stupid, in a joyously stupid way, but the band knocked the hell out of both. With “Dude,” Perry matched a spectacular light show, surprise for surprise, turning a song that could have been watered down for a jukebox musical into an arena-rock showstopper.

Aerosmith still rocks, hard, not in spite of their five decades but because of them. They’re tougher and scrappier than they used to be, the way Hugh Jackman is sharper as old Wolverine in “Logan” than he was as fresh face in the first “X-Men.” They’re at a point where they have nothing to prove, and could easily rely on a slew of backup musicians to carry them through their just-short-of-two-hour show. They act like they don’t give a damn anymore, but play like they do.

I know I haven’t mentioned “Dream On” or “Walk This Way” yet. Don’t worry, they’re there, and they’re ecstatically good. It turns out that a line about “all these lines in my face getting clearer” is a lot more compelling from a 71-year-old than a guy in his twenties.

Tickets for performances of AEROSMITH: DEUCES ARE WILD through December 2019 are on sale now.