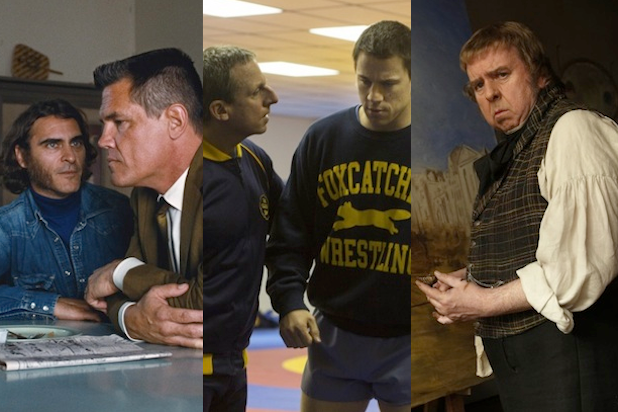 Beginning this week, moviegoers in Los Angeles will be flocking to the corner of Hollywood and Highland for a major cinematic event that is expected to draw capacity crowds to the Chinese Theatre.

For the first time since it moved to Hollywood, the American Film Institute’s annual festival will lose what is normally its showcase theater, the TCL Chinese. That recently upgraded venue is being monopolized by a 70mm IMAX run of Christopher Nolan‘s “Interstellar,” one of the big releases of the year and a presumed blockbuster too lucrative to relinquish.

But the loss of a showcase venue didn’t really faze the AFI Fest, which simply moved its biggest screenings into the Dolby Theatre, the home of the Academy Awards and a venue that has been used for the premieres of films like Pixar’s “Brave” and Kathryn Bigelow‘s “Zero Dark Thirty.”

The top two balconies of the Dolby, which offer vertiginous views, won’t be used by the festival – but that still leaves a seating capacity of about 1,600, more than half again as large as the TCL Chinese.

(And given the complaints about IMAX audio after a recent screening of “Interstellar,” there will probably be fewer sound complaints in the theater named after and equipped by the sound company Dolby.)

“We actually had been thinking about finding a venue where we can have everyone for our galas,” AFI Fest 2014 director Jacqueline Lyanga told TheWrap. “We’ve needed more than the 900 seats in the Chinese, and the Dolby gives us that.”

The Dolby will play host to the opening-night premiere of J.C. Chandor’s “A Most Violent Year,” as well as to gala screenings of Rupert Wyatt’s “The Gambler” and Tommy Lee Jones‘ “The Homesman,” a special salute to Sophia Loren and the closing-night gala for Bennett Miller’s “Foxcatcher.”

And it’s no doubt unfair to joke that AFI Fest will play second-fiddle to the first week of “Interstellar,” because the festival is also using the Chinese 6 multiplex, the nearby Egyptian Theatre and the Hollywood Roosevelt Hotel to present eight days of screenings, conversations and panels, encompassing 73 features and 45 shorts in more than 150 separate events.

And taking a cue from last year’s preview of the first six minutes of David O.Russell’s “American Hustle,” Ava DuVernay will present a first-look at 30 minutes of footage from her unfinished film “Selma,” followed by a conversation with DuVernay, actor David Oyelowo and producers Jeremy Kleiner, Dede Gardner and Oprah Winfrey.

“I’m hoping our ID as a festival has crystallized,” said Lyanga. “It’s a great blend of foreign films, independent films and studio films. And we’re really aiming to look back at the year and showcase films we’ve seen and loved across the entire year.”

And it’s surrounded by so many parties, receptions and outside screenings – not to mention the American Film Market taking place across town in Santa Monica, and the Academy’s Governors Awards happening on Saturday night one floor away from the Chinese 6 – that the week becomes an exhausting demonstration that awards season has arrived with a vengeance.

Last year’s AFI Fest attendance was almost 100,000 – and with tickets given away free thanks to chief sponsor Audi, Lyanga expects a similar turnout this year.

“I think that’s a comfortable number for us,” she said. “We have a huge industry audience, but also a huge public audience. We’re trying to be a combination of art and commerce in a way that’s not forced.”