"The African Queen" was a childhood favorite from the day I first saw it. Stunned by its intertwined action, pyrotechnics and the comic romance of two mismatched eccentrics, I longed for the day I could add it to my DVD collection. 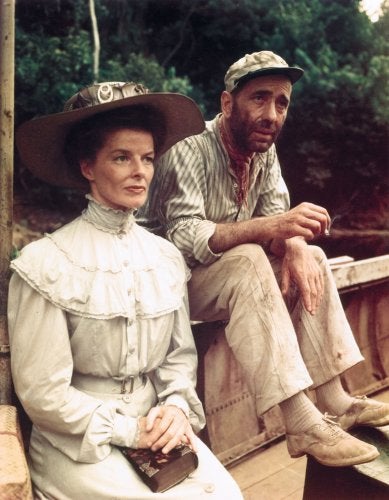 But this satisfaction was a long time coming. Long embroiled in legal complications and previously available only in an unsatisfactory VHS version, John Huston’s enthralling tale of a Mission Impossible, conducted by a ratty river boatman (Bogart in his only Best Actor performance) and a prim spinster (Katharine Hepburn as Eleonor Roosevelt!) remained the only film on the AFI’s list of 100 great movies NOT on DVD.

But now, 60 years after its initial sensational release, Huston’s masterpiece has finally been meticulously restored, both sound and picture, to a point that surpasses any print originally on the screen, with a release on DVD and Blu-ray set for March 23.

The restoration was complicated since the original negative could not be shipped from the U.K. to the U.S. It had to be SCANNED and then EMAILED (!) from London to Burbank, where Ron Smith and his team of experts went to work.

"The African Queen" was, among other things, the first full Technicolor film shot with enormously cumbersome equipment on inaccessible locations in Africa, where soldier ants, venomous snakes and poisoned water felled actors and crew alike. (Bogart and Huston were immune from the dysentery that struck down Hepburn, et al. – they only drank alcohol!)

Fortunately for the restoration team, the film’s cinematographer, the great Jack Cardiff ("The Red Shoes," "Black Narcissus," etc.) watched a print of the movie before he died last year and gave a (recorded) running commentary on what the color was supposed to look like.

Cardiff considered his photography on the film rudimentary, compared with his work on "The Red Shoes"; he was wrong. When I finally saw the restored movie, I was crying so hard I couldn’t see the damn picture.

The film was produced by the legendary Sam Spiegel (who originally billed himself, more patriotically, as S.P. Eagle). Spiegel went on to produce "On the Waterfront," "The Bridge on the River Kwai" and "Lawrence of Arabia." Not too shabby. Spiegel’s biographer, Natasha Cavasoni-Fraser, said of him, “Sam had only two problems: money and women.”

Larger-than-life John Huston brought order out of chaos and two unforgettable performances from his stars, who only worked together this once. Huston was the director who loved books: "The Maltese Falcon," "The Asphalt Jungle," "The Red Badge of Courage," "The Treasure of Sierra Madre," "Moby Dick," "Wise Blood," "The Man Who Would Be King," "The Dead" and, of course, "The African Queen" – all came from books. Advising a class of film students shortly before his death, Huston counseled them with one word of advice: "Read."

The restoration of the film was partly the result of my own letter-writing and general agitation campaign.

Once the project was truly under way, I persuaded Paramount Pictures to finance a film that I produced about the making of the movie. Titled "Embracing Chaos: Making ‘The African Queen,’" the documentary is also on the DVD. Directed by Eric Young, it takes viewers on the strange and exciting journey of creating a masterpiece in the jungle.

Now everyone can enjoy "The African Queen."

BIO Nicholas Meyer
Nicholas Meyer wrote and/or directed "Star Treks" II, IV and VI. He wrote the best-selling Sherlock Holmes novel "The Seven-Per-Cent Solution" and his screenplay for the film was nominated for an Oscar. He directed the most watched made-for-television movie, "The Day After," about nuclear war, and wrote the screenplays for Philip Roth's novels "The Human Stain" and "The Dying Animal" (filmed as "Elegy").

Nicholas Meyer wrote and/or directed "Star Treks" II, IV and VI. He wrote the best-selling Sherlock Holmes novel "The Seven-Per-Cent Solution" and his screenplay for the film was nominated for an Oscar. He directed the most watched made-for-television movie, "The Day After," about nuclear war, and wrote the screenplays for Philip Roth's novels "The Human Stain" and "The Dying Animal" (filmed as "Elegy").
x