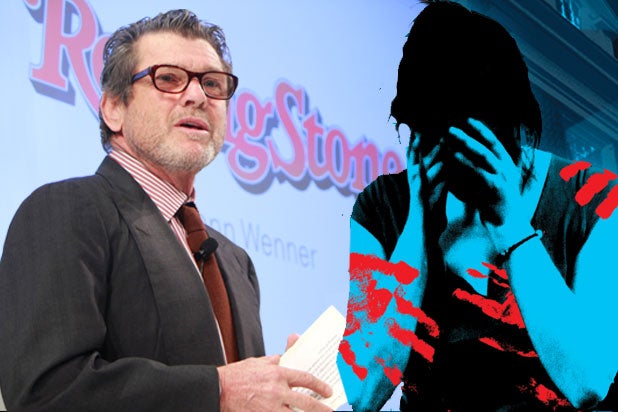 As the media focuses on the fallout from Rolling Stone’s debacle surrounding its erroneous “A Rape on Campus,” and the future of the magazine, another consequence comes into focus: the relationship between sexual assault victims and the media.

Rolling Stone’s failed attempt to accurately put the spotlight on the serious issue of campus sexual assault surely won’t prevent other news outlets from digging into the subject.

It just remains unclear if victims will want to talk to them.

Hettick, who says she was raped at a college dorm party while heavy drinking and partying was going on, said the Rolling Stone mess just adds another layer of difficulty for assault victims.

“It does make us, as victims, not want to trust the media, especially when we’re putting our personal information out there and it’s being scrutinized,” she said.

Whether the Rolling Stone accuser — “Jackie” — was telling the truth, half the truth, or lying, isn’t really the point, Kelly said. Whatever the case, Rolling Stone’s poor handling of the story gives a “bad rap to victims.”

“Not that many people lie about rape — it’s very embarrassing to come out and say you’ve been raped … it’s a terrible process with school officials and police,” she said. In fact, recent data shows shows between two and eight percent of rape accusations are false.

If a victim doesn’t want to give the name of the perpetrator or key details, a reporter shouldn’t rush to print it, but instead try to speak to more victims that are more open on details — a decision Rolling Stone reporter Sabrina Rubin Erdely decided against.

Scott Berkowitz, president of RAINN (Rape, Abuse, and Incest National Network), is hopeful Rolling Stone’s story doesn’t have a negative impact, but the fallout from the magazine’s mistakes might cause victims to fear reporters being more aggressive with them and more doubtful of their stories.

“There’s a risk that it has a negative effect long term,” he said. “Most reporters we deal with try and present some balance and try and make the effort to get quotes from both sides.”

In the case of Rolling Stone’s story, Erdely’s lack of contact with the accuser’s friends or the male students accused of the gang rape was the biggest red flag that led to other glaring mistakes and holes in the story.

Another sexual assault survivor, Harmony Reid, who says she was raped at Plymouth University in 2006 by a fellow student, told TheWrap most survivors are blurry on their attacks — a fact reporters should take into account when weighing how aggressively to push them.

“It’s important to remember that survivors don’t always remember all of the details,” she said. “When you have gone through a traumatic experience, it’s very difficult to remember everything in chronological order and remember all the facts — that is the truth when it comes to being a survivor.”

Reid knows from personal experience, as according to her, when she was questioned by New Hampshire police, handcuffs were thrown in front of her by an officer who accused her of lying.

“When you speak to a survivor … go at their pace, and while it may seem like a survivor is bouncing around in the story or something doesn’t seem right, it may not be because they’re making up the story or it’s not true; it might be that the details are not in order.”

Patience is a virtue, Reid advised journalists, and if their gut tells them something doesn’t seem right, it’s fine to follow up, but in a compassionate tone that’s trying to verify the facts instead of an interrogation.

“From personal experience, I’ve had reporters seem very compassionate and then spin the story on me. ‘Hey wait a minute … you didn’t get the facts wrong, but you definitely got the sensation of the story wrong,'” Reid recounted telling one reporter.

She worries that the Rolling Stone story will make a lot of survivors hesitant: “I think a lot of survivors who saw the article are a little bit leery about ‘Oh my goodness I want to speak out about what happened, but what if no one believes me?”

“As a survivor, you’re trying to give as many details as possible with as little words,” she said.  “I’m sure many survivors, when they see articles like that, do get nervous … it can be extremely hard for them coming forward that they’re going to be believed.”

After Columbia School of Journalism released its 12,866-word review of Rolling Stone’s story, which found “institutional failure” in the reporting process, publisher Jann S. Wenner said no one involved with the erroneous story will be fired.