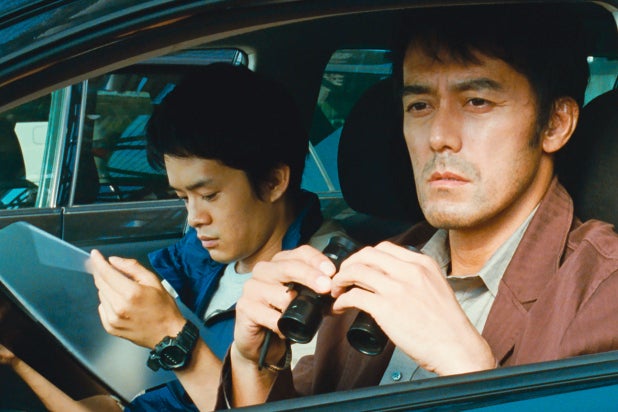 The writer-director’s follow-up to 2016’s “Our Little Sister” continues its themes of family, death, life expectations and dreams unfulfilled. The film’s main conduit is Ryota (Hiroshi Abe, Kore-eda’s “Still Walking”), a middle-aged detective who tells people that he’s working the job only to get material for his next novel.

The truth is that the glory from his first novel has long since faded, and his writer’s block (combined with a gambling addiction, inherited from Dad) keeps him perpetually broke. No small effect of his problems is his wife, Kyoka (Yôko Maki, Kore-eda’s “Like Father, Like Son”), leaving him and taking custody of their son, Shingo (Taiyô Yoshizawa).

Also Read: 'Our Little Sister' Cannes Review: Nothing Much Happens, and That's Beautiful

Abe’s Ryota always looks disheveled and even a little scuzzy, wearing clothes that seem freshly dug from a pile in his messy apartment. He’s constantly late and isn’t above extorting clients, after which he inevitably stops at the track to “double his money” so he can afford the child support he continually promises but is rarely able to pay.

Despite his inability to straighten himself out, Ryota remains obsessed with reuniting his family, taking a colleague along to spy on his ex and goading young Shingo for information about her new boyfriend. He’s desperation personified.

Still, Ryota’s heartbreak sneaks up on you. His mother (Kore-eda regular Kirin Kiki) is genial and charming, gently prodding her wayward son but never lecturing him. Even his more pointed sister (Satomi Kobayashi) remains level-headed when she confronts him about his transgressions. (Which, at one low point, includes digging through his mother’s things for cash or valuables.) Everyone jokes about Ryota’s irresponsibility; even Hanaregumi’s lighthearted score, which is dominated by whistling, indicates that he’s a lovable cad.

But each time he’s around his ex-wife and son, Ryota’s sorrow becomes more apparent. The film’s gut punch is delivered in an extended sequence in its last chapter; a typhoon, along with some contrivances by Ryota, result in the family spending the night at his mother’s apartment. His desperate attempts to insert himself into conversations or activities between his ex and his son are aching; a frank talk that the former couple has is like a knife to the heart. Kore-eda keeps the background quiet during this chapter — all he offers is the gusty rain, regrets and intense longing.

The central message of “After the Storm” is that life very rarely turns out the way one expects or hopes. When Ryota is insulted by Shingo’s classmate (on whom he had spying), he tells the kid, “It’s not so easy to grow up to be the man you want to be.” His mother, who wants to see the family together again, speaks of how men are always chasing the past or dreaming of the future, never finding happiness in the reality of the present.

Talk of accepting truths and moving on will knot your stomach; inevitably, you’ll reflect on your own station in life and weigh whether or not you feel like Ryota, who tells his son, “I’m not who I want to be yet.” And isn’t such evocation the point of all art? With this measure in mind, Kore-eda has created a masterpiece.

Netflix in March: What's New, What's Leaving, and What to Watch

“How to Get Away with Murder,” “Grace and Frankie” and “Vampire Diaries” are just a few of the new additions to Netflix

What's Coming March 3: "Greenleaf" Season 1
Picked up from OWN, "Greenleaf" is the story of a megachurch family and the tensions that underlie their commitment to faith. Starring Lynn Whitefield and Merle Dandridge with appearances by Oprah, this show is sure to take you along on its emotional rollercoaster.