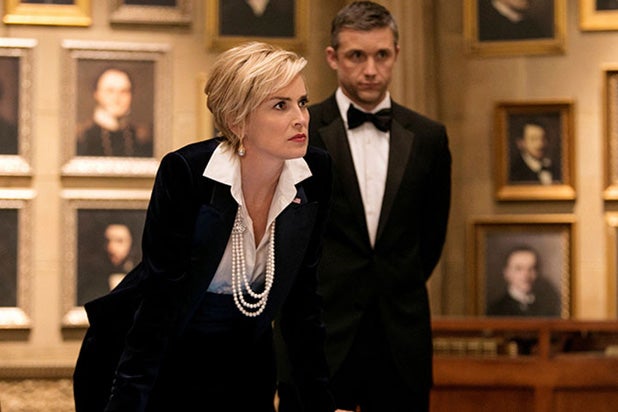 Sharon Stone is making the jump from movie star to TV with her leading role on “Agent X.”

The TNT spy drama stars Stone as Vice President Natalie Maccabee, who pledges to protect the nation “against all enemies, foreign and domestic,” and comes to realize that means the exclusive command of a secret operative for missions too sensitive for either the FBI or CIA.

“I just think television kind of has more to offer right now,” the Oscar-nominated actress explained in an interview with TheWrap ahead of the TNT drama’s two-hour premiere on Sunday.

“Good film parts are less and less , because the studios have less and less grip on how to bring people to film,” she continued. “They’ve used tentpole movies to such a degree that they’ve wiped out their own business. The film industry has kind of wiped itself out.”

Stone spoke to TheWrap about doing a television show, the difference between film and TV, and the 2016 presidential election

TheWrap: How did you come to end up doing “Agent X”?
Stone: [Executive producer] Armyan Bernstein called me to ask for a meeting and talk about the script. And I thought it was a very interesting idea. We don’t see much of the Vice President. When they’re being sworn in it’s different than the President, because they say they will protect the nation against enemies both foreign and domestic, and then we don’t see much of them. To use that, coupled with all of these traffic cameras and cameras all over the place tracking criminals as the premise for the show, I thought was a very intriguing idea. And I like the idea of bringing politics and the current climate of so much crime into the home in this kind of family, popcorn way. Particularly while having a woman in the White House.

What made you want to do a TV series?
I just think television kind of has more to offer right now. Good film parts are less and less because the studios have less and less grip on how to bring people to film. They’ve used tentpole movies to such a degree that they’ve wiped out their own business. The film industry has kind of wiped itself out.

Natalie gets thrown into the deep end right away when the series begins, how does she adjust to this job she never asked for as the series goes on?
I think her primary objective is to make the best choices for the nation. And she’s clear that she’s not there to liked. And she’s not pandering for favor. She’s there to make the most thoughtful, patriotic, intelligent choices that she can. And in order to do that, she has to assume increasing authority.

Malcolm is pretty much the only person Natalie can turn to for guidance in all of this. How would you describe their relationship?
Her relationship with Malcolm is not unlike my relationship with Mac [Gerald McRaney, who plays Malcolm on the show]. Because he’s so experienced in television and as an executive producer. He’s really like my wingman. He really helps me to make the best decisions for the show. He has tons of television experience, and he knows how to clean up scenes and make the best choices on set, and how to deal with a new director every week. All these things that are new to me. He knows how to deal with a team of writers, and writers who have a different kind of authority on set than they do on film sets. And in my opinion, too many cooks in the kitchen. On a film set, the director is the boss, but on television, all these people come in and, in my opinion, waste all kinds of time having too many opinions. Mac is very good at being diplomatic with all of that.

How does the death of Natalie’s husband inform the character moving forward?
I think anytime that you’re bonded with someone very deeply and you lose them, part of them lives on in you. And you want to move forward with as much integrity and as much dignity as you can to honor their memory and to carry them forward in what you do. And I think that’s Natalie’s perspective in this, in her political goals as well as her personal goals.

The 2016 presidential election is dominating the news cycle right now, will we see any of that reflected on the show?
The fact that we’re looking at women playing these kinds of parts and having characters like James Earl Jones as the Chief Justice of the Supreme Court, proudly swearing a woman into that office, I think that in itself demonstrates a sort of social climate that speaks quite proudly to the conscience of America and their openheartedness to a woman in the White House.