“America’s Got Talent” viewers have seen many a mindreader. But on Tuesday, we got our first-ever mentalist who used one person’s mind to read two other people’s minds. Yes, it was just as bonkers as that sounds and the judges went wild for it.

During his audition, which you can watch via the video above, mentalist contestant Kevin Micoud pulls “AGT” host Terry Crews in to help with his act, which begins with having judges Heidi Klum and Sofia Vergara pick from a stack of photos of former “AGT” contestants and keep the one they drew secret. He then brings Terry up on stage and starts to “extract” his mind, planning to use it as a tool to pull out Heidi and Sofia’s thoughts as well.

It all gets even crazier when you see the wild blue images and special effects Micoud floats in midair to illustrate his mentalist magic for Terry, Sofia, Heidi and judges Simon Cowell and Howie Mandel. This guy is clearly not playing around, and his hard work pays off when he is able to accurately guess the “AGT” contestants that Heidi and Sofia have on the photographs they selected. 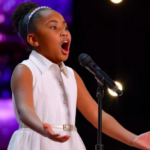 As further proof that he is truly a mind reader, Kevin shows the judges a picture of him before the act, guessing in advance which two photos that Heidi and Sofia would pull from the stack of “AGT” contestants. Of course, he was right.

Kevin gets a “yes” from each judge and a round of mind-blown applause from the audience.