In the video above, you’ll see Victory give her show-stopping performance of “Juliet’s Waltz” from the opera “Roméo et Juliette.” Her spectacular rendition wowed the audience and the judges alike.

Mandel told Victory: “I was not expecting that and you’re angelic. I loved it. I loved it.” 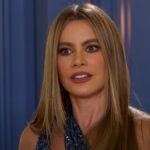 “I loved it, too,” Klum added. “You have a beautiful voice. It was incredible. You are incredible”

Vergara concurred: “I agree, you are a star. I think you have a powerful voice. That was amazing, I really loved it.”

Then they asked Cowell to weigh in.

“I think, you know, auditioning and turning up sometimes is really, really important for your career,” Cowell said. “And I think you’ve been incredibly brave to come here, I have to say. I just want to talk to Terry for one moment. Terry, can I ask you a question?” 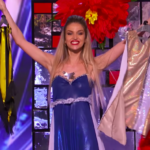 Crews rushed over as Cowell got everyone together for a quick chat by the judges’ table. We can’t make out much, but in the whispers, we hear Cowell say, “How would you feel if we were to do something different?” Then he turned to Victory and said that, unfortunately, they can’t all give the young opera singer a “yes” — because instead they are all going to give her the first-ever group Golden Buzzer.

“Look, Victory, as I said, turning up in terms of your career is really important,” Cowell said. “However, we’re not going to give you a ‘yes’ today. We’re going to do something else we’ve never, ever, ever done on the show before. We are all going to give you something special.”

Then the judges and host all hit the Golden Buzzer together while confetti rained down during the history-making “AGT” moment.