“America’s Got Talent” always has some incredible performances on-screen, but sometimes, greatness happens during commercial breaks, too. That was the case this week, when host Terry Crews gave the audience a performance of “A Thousand Miles” in between act setups.

Luckily, someone was on hand with their phone, and captured the moment. Crews posted the video on TikTok, with the caption “Always ready for this song! The perfect @agt audience hype song!” 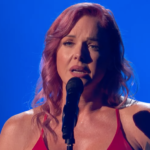 The Vanessa Carlton hit has long been associated with Crews after his role in “White Chicks” in 2004. Crews’ character, Latrell Spencer, is obsessed with the song, dramatically singing along to it in the car. It quickly became a fan favorite, to the point that Crews even performed it on “Lip Sync Battle” in 2015. That performance has almost 20 million views on YouTube to date.

Though Crews appears to have only danced along to the song on “AGT,” rather than sing, he still made some callbacks to the original moment. Just like in “White Chicks,” Crews did his iconic head shake during the violin riffs in the song, which promptly caused the audience to go wild.

You can watch Crews’ full performance in the video above.