Ahmed Ahmed’s father missed the birth of his eldest son in a hospital near Cairo because he was in line at the American Embassy getting immigration papers. When he finally made it to the hospital, he announced to his wife and the infant Ahmed, “We’re going to America!” A month later, they did.

Flash forward 39 years and Ahmed, now a successful stand-up comic and actor, is posing for pictures with his father and Robert De Niro at the worldwide premiere of Ahmed’s documentary, “Just Like Us,” at the Tribeca Film Festival in New York City last Saturday.

“I think it says a lot about the festival that, nine years after the founding of this festival following 9/11, they’ve extended an olive branch and welcomed a Muslim-Arab film like ours,” said Ahmed in an interview a few days later. (The downed World Trade Center towers were located in the heart of New York’s Tribeca neighborhood, where festival co-founder Robert De Niro lived.)

“Just Like Us,” directed and produced by Ahmed, follows stand-up comics (including Ahmed) as they perform on tour in the Middle East. The movie offers lots of laughs but also insights into how sophisticated, Westernized and with-it the Middle East is fast becoming, at least in major urban areas. Hajibs and humor, it contends, can mix. 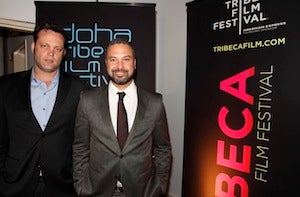 The comics in "Just Like Us" are primarily American (including Tommy Davidson and Tom Papa), but viewers also see Englishman Omid Djalili, who is of Iranian descent (and who stars in “The Infidel,” a crowd-pleasing, British cross-cultural comedy also showing at Tribeca), and a couple of fledgling Middle Eastern comics. They perform in English at gigs attended by locals in Dubai, Beirut, Riyadh (where the show’s location was a secret until the last minute, to keep the religious police from shutting it down), Cairo and Alexandria.

“I wanted to use a comedy tour as a way to deliver a message,” said Ahmed. He hopes his film will alter the misperceptions held by most Americans–the film includes a very funny montage of man-in-the-street interviews in the U.S. in which almost no one can explain the distinction between being a Muslim and an Arab–about contemporary life and culture in the Middle East.

“There is a modern generation coming of age in the Middle East. They’re all on Blackberries and Facebook. They know English. They get all the pop cultural references,” he said.

“Comedy crosses borders; it’s the common language of the world,” he added. “At the end of the day, we’re all alike. Everyone likes to laugh.”

Ahmed, who was raised in Riverside, California, trained as an actor but says he turned to stand-up when it became clear that, “terrorists, cabbies and sleazy Arab princes, those were the roles I was being offered.” Indeed, he portrays a terrorist in the first “Iron Man” and in “Don’t Mess With the Zohan.”

It was Vince Vaughn’s 2006 documentary, “Wild West Comedy Show: 30 Days & 30 Nights – Hollywood to the Heartland,” that inspired Ahmed to make his own film. He and Vaughn (pictured above with Ahmed) are old friends – Vaughn flew to New York for the premiere of “Just Like Us” – and Ahmed was one of the stand-up comics on the tour which Vaughn filmed.

“I felt,” said Ahmed, “like I took a class in documentary filmmaking watching how that movie was put together fast, shot, edited and then went to Toronto”–it first screened at the 2006 Toronto International Film Festival–“and was sold. I told Vince, ‘I’m stealing your idea.’ “

Ahmed said the 72-minute “Just Like Us” cost north of $1 million (including travel costs), which came out of his pocket and that of his un-named business partner in their company, Cross-Cultural Entertainment. The film is currently seeking distribution.

But let’s get back to that red carpet moment with De Niro at the premiere. Ahmed says the veteran actor told him–and here he launched into a decent De Niro imitation — “I really liked your movie. It was good. Uh, it was good. The movie was good.“

Then De Niro zeroed in on Ahmed’s dad, who appears several times in the film, telling bad jokes and mugging. Ahmed said De Niro pointed at his father–using the same gesture that has made weaker characters cower in countless movies–and told him, “Ehh, you’re the guy in the movie.”

Now, Ahmed said, fame has gone to his father’s head: “He thinks he should go on tour with me and be my opening act.”