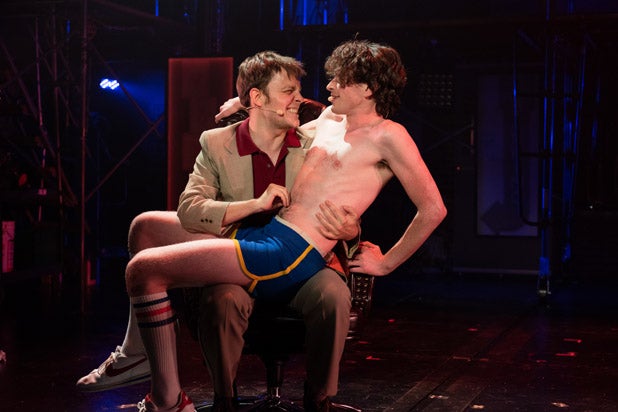 Before Harvey Weinstein had his movie butchered in the editing room, Mark Christopher wrote and directed a cautionary tale titled “54,” about a young white gay guy (Ryan Phillippe) who thinks wearing tight satin trunks and working as a server for Studio 54’s Steve Rubell (Mike Myers) will make him a star. By the time Weinstein finished with the movie, Phillippe’s character had no identifiable sexuality and the plot no longer made sense. Occasionally, Christopher’s original cut, if Miramax doesn’t prevent it, shows up at LGBT film festivals around the country.

For those who missed the original “54,” there’s the new musical “This Ain’t No Disco,” which opened Tuesday at the Atlantic Theater Company.

Peter Laprade effectively fills Phillippe’s shorts in the role of the young and unquestionably gay twink-on-the-make Chad in the new musical by Stephen Trask and Peter Yanowitz. They’re the team that also gave us “Hedwig and the Angry Inch,” and they share the book credit on “Disco” with Rick Elice (“Jersey Boys”).

Also Read: 'Trainspotting' Theater Review: The Needles Are Real, the Other Stuff Is Not

In the musical, Theo Stockman is far sleazier in his Rubell portrayal than what Meyers gave us; in fact, Rubell in “Disco” emerges as the Roy Cohn of the dance world. Trask, Yanowitz, and Elice have also beefed up the presence of Andy Warhol, who barely qualified as a cameo (Sean Sullivan) in the film. Will Connolly hides under Warhol’s signature silver wig in “Disco,” but with minimal effort he becomes an evil twin in disguise to the very boisterous Stockman. (Why Connolly’s character is given the show’s inspiring “Climb Every Mountain”-style 11 o’clock number is truly baffling.)

Warhol in “Disco,” however, isn’t really Warhol. He’s identified as The Artist, and The Factory is The Warehouse. This intentional lack of specificity creates an odd and unresolved disconnect: The show is giving us half a roman-a-clef, while the other half is clearly the real thing, Rubell and Studio 54.

Although the time frame is 1979-80, set designer Jason Sherwood envisions The Warehouse as The Factory looked a decade earlier, with lots of Mylar. The pop artist’s floating Silver Clouds from the early 1960’s also make an appearance.

Naming the character The Artist rather than Andy Warhol saves the book writers some problems when the man in the silver wig begins to promote the singer Sammy (the slightly pompous Samantha Marie Ware), a character that almost derails the show. Sammy begins as a kind of female Jean-Michel Basquiat, a person with punk ambitions who is denied entrance to Studio 54 because of her black porkpie hat. But she’s not an artist like Basquiat. She’s a singer, and not a punk singer like Poly Styrene or even Patti Smith, but rather Donna Summer. With spangles and a lotta leg.

No wonder they call him The Artist and not Andy Warhol.

By the end of act one, Sammy is a star and Chad, a.k.a. Rake, is a joke in the art world, although it’s never firmly established what kind of art he’s trying to promote. Graffiti, maybe. For a moment, it seems we’re watching Keith Haring but without the talent.

In act two, Chad essentially sticks around only to hold Sammy’s hand when fame gets to her and, like a deux ex machina, a big bottle of pills enter the picture to land her in the hospital.

“This Ain’t No Disco” is that classic example of a problematic book working mischief on an excellent score. Thankfully, “Disco” is almost nonstop singing, and Trask and Yanowitz show a true gift for melody, one you’d never guess they possessed from having heard “Hedwig.” They’re calling their new musical “a rock opera.” I missed the rock, but did hear some very fine ballads, patter songs, bubblegum, rap, and, yes, disco.

And much better than fine is their brilliant recitative work.

As most operagoers know, the recitative is when you catch a quick nap. Not in “This Ain’t No Disco.” The wordplay in these sung-spoken moments never fails to dazzle. Take, for example, the wonderfully devious Chilina Kennedy. She plays a craven publicist turned craven talk show host who is part Joan Rivers, part Peggy Siegel, part Jeanine Pirro. When The Artist reveals that Studio 54 is closing (“If you make a building out of lights, when you turn them off, it disappears”), Kennedy’s character mockingly sing-talks, “Mmmm. Tears. / So there you have it folks, end of an era. / I know that my cheeks will be streaked with mascara.”

Here and there, bits of dialogue move the muddled story along, and while one misses following Chad/Rake’s story beyond what Mark Christopher gave us at the movies, the good news is that Trask and Yanowitz’s score is never far away. Darko Tresnjak’s direction fails to disguise the book’s many flaws, but he keeps the story moving even when it takes one of many wrong turns.