A version of this review of “Ain’t No Mo’” ran in March 2019 for the Off Broadway production, with a different design team and mostly the same cast.

It’s the most ominous airplane since Rod Serling put his teleplay “How to Serve Man” on “The Twilight Zone” in 1962. The airplane in question is the centerpiece of Jordan E. Cooper’s equally ominous and amazing new play, “Ain’t No Mo’,” which opened Thursday at Broadway’s Belasco Theatre after a a 2019 run at the Public Theater. OK, the airplane in “How to Serve Man” is really a spaceship, but then “Ain’t No Mo” takes us on a far more disturbing trip.

Cooper connects a number of comic vignettes to an email blast from the U.S. government: All Black citizens will be given a free one-way ticket to Africa. Latinos are on a wait list in case there’s anyone on that priority list who can’t or won’t make the trip. But it’s an offer, like the Godfather’s, that no one can refuse. Barack Obama is pilot, and an airline employee named Peaches gives instructions at the gate as she zaps tickets and says, “Have a nice flight!” She repeatedly cautions passengers not to look back at America, or else risk being subjected to very Old Testament treatment. Of course, somebody looks back.

Cooper plays Peaches, complete with vintage Hollywood hair and flashy suits out of RuPaul’s closet, and she is a force to fear. Whites aren’t to be found anywhere near her station at the airport, and so Peaches is free to let go on what’s right and what’s wrong with her people in vivid, expletive-laden detail. Peaches is every apparatchik you’ve had to tolerate for that minute or two that a certain secretary/TSA agent/voice on the phone/maitre d’ is in control of your life. 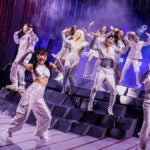 Interspersed with these Peaches-at-the-airport moments are seemingly unrelated scenes set in a jail, a family dining room, a “Real Housewives”-style televised reunion and a funeral. It’s the funeral that comes first, and it falls on the day that Barack Obama was elected president and signals the death of the man called Righttocomplain. Marchant Davis plays the reverend and his eulogy for Rightttcomplain may set a new record for the utterance of the N-word in any time frame. Davis also blows the roof off the theater before the hope of that election collapses into a sociopolitical apocalypse. After this götterdämmerung, it’s no wonder Peach’s station at the airport gate is jam-packed.

Repeatedly, Cooper’s writing delivers sustained absurdist comedy that comes crashing down at scene’s end, only to pick back up again for yet another wild ride through bigoted modern America.

This young playwright’s satire takes no prisoners. The new gender vocabulary gets a sendup in the “Real Housewives” reunion when one white woman, born Rachel but now calling herself Rachonda (Shannon Malesky replaces Simone Recasner from the Public Theater production), claims to be “transracial,” has the hair if not the skin to prove it and gets into a fight with the Black women (Fedna Jacquet, Ebony Marshall-Oliver and Crystal Lucas-Perry being ferocious) who think she had a “choice” in her transformation. Davis returns in this vignette to parody an Andy Cohen who turns his gayness on and off at will.

Later in “Ain’t No Mo’,” a wealthy Black family finds its dinner interrupted when the long-held captive in their basement escapes to torment them. Lucas-Perry’s impersonation of “Blackness” embodies everything this family doesn’t want to admit about its status in the United States. And once again, Cooper runs the gamut, from the outlandishly ridiculous to the grimly irrational.

Stevie Walker-Webb’s direction makes repeated and awesome leaps, but he and Cooper are equally good at depicting life in between the satiric extremes. A widow (Jacquet) saying goodbye to the ghost of her murdered husband (Davis) and the release of two prisoners (Jacquet and Lucas-Perry) from jail are moments that deliver a grounding pathos.

These two pivotal scenes have their fantastical elements too, but the outrage regarding a country gone wrong feels rawest here. And Cooper suddenly whips out that cushion of comedy from under us. Some wounds aren’t supposed to heal. 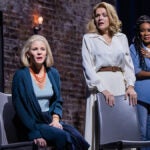