It was billed as just another Writers Guild screening, a chance for WGA and other Hollywood guild members to see “Up in the Air” and hear co-writers Jason Reitman and Sheldon Turner participate in a post-screening Q&A.

And the screening Sunday afternoon at the Writers Guild Theater, which fell into the no-man’s-land between the January 23 deadline for Oscar nominating ballots and the Academy’s February 2 announcement of nominees, was originally designed as just another entry in the WGA’s week-long series of member screenings of their nominated films.

In the end, though, it served another purpose entirely:  damage control.

“It’s the WGA Sunday afternoon smackdown,” said moderator Pete Hammond by way of introduction, mentioning that “the bloggers” had been making a fuss about the relationship between Reitman and Turner and the issue of their shared screenplay credit. 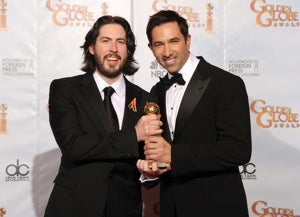 Hammond didn’t say it, but it was the paper and website for which he writes a blog, the L.A. Times and the Envelope, that had started the stink a week earlier with an article (in a different blog, not Hammond’s) that essentially alleged that Reitman, who also directed the film, was attempting to hog credit despite the fact that Turner had written an entire script before Reitman became involved.

It didn’t help matters that the story was posted just before the January 17 Critics Choice Awards, at which “Up in the Air” won the award for adapted screenplay but only Reitman spoke, failing to thank his credited co-writer.

Clearly, a show of unity was in order, lest a minor (and, in Hollywood, rather common) controversy grow and undermine the film’s Oscar chances.

Which  means the Sunday afternoon screening,  while previously scheduled and promoted to WGA members, suddenly became just as important as a chance to respond to the hubbub.

Interestingly, the vast majority of the guild audience – who, based on its laughter and applause, absolutely loved the film – seemed unaware of any controversy.

After laughing at Hammond’s characterization of the chat as a smackdown, Reitman and Turner quickly (and, of course, entirely predictably) proclaimed that they were friends, even though their work could not be deemed a collaboration in any real sense of the word.

“It’s a unique situation,” said Turner, whose other scripts include the remakes of “The Longest Yard” and “The Texas Chainsaw Massacre.” “I met Jason for the first time after the movie was done.”

The way it worked, they said, is that Turner discovered Walter Kirn’s book around 2001, and wrote a screenplay that he sold to DreamWorks in 2003.

Years later, Reitman discovered the book as well. He persuaded his father, Ivan Reitman, to buy the rights – and while the elder Reitman commissioned a screenplay from Ted and Nicholas Griffin, Jason proceeded to write his own script. He did so, he said, completely independently of the Turner script, with which he still professes to be unacquainted.

But the Writers and Directors Guilds have long been a little suspicious of each other – so any time a director takes screenwriting credit, the WGA launches an automatic  investigation to determine if any other writers also deserve credit. Reitman admitted he was confused when the subsequent arbitration ruled that a script he’d never read deserved credit as well.

Now, Reitman said, he doesn’t mind sharing the screen credit, because “I realized we were both drawn to the book for the same reasons, and we both sat down to write the same screenplay.

Turner echoed the sentiment: “How can I not be proud to sit next to him and have my name next to his?”

Their explanation left one big question dangling – namely, why would the WGA, which admittedly often favors the first writer on a project, rule that Turner deserved credit if Reitman had never even laid eyes on the original script, if he had truly worked independently?

The answer came in a casual comment late in the Q&A, in which Reitman congratulated Turner on the fact that one of the passages he’d written – the consoling boilerplate used by George Clooney to placate workers he’d just fired, which begins with the line “Anyone who ever built an empire or changed the world sat where you’re sitting right now” – had been used a couple of nights earlier in a sketch on one of the final Conan O’Brien Tonight Shows.

“I always thought that was from the Griffin script,” said Reitman. “But then I found out that you wrote it.”

In other words, Reitman didn’t work completely independently; at one point, he incorporated some elements from the script the Griffins had written for his father. And they, in turn, had seen and taken elements from Turner’s script.

So there’s the link, the thread that will bind Reitman and Turner from now to the Academy Awards.

Side-by-side, smiling all the way.

ADDENDUM: The original version of this story was amended to reflect the fact, unknown to me when I originally wrote the piece, that the screening and Q&A was a previously-scheduled part of the WGA screening lineup.