According to Paramount officials, the M. Night Shyamalan family film enjoyed the best 12 a.m. start this summer for a non-sequel film. The studio, however, didn't heavily promote the midnight opening, or say how many 12 a.m. engagements there were.

However, reviews have been "Jonah Hex"-soft, with only a tiny handful of critics around the country having anything nice to say about the movie.

Industry trackers projected a Fourth of July weekend start of around $45 million for "Airbender."

No pressure or anything.

A lot rides on the weekend performance of Paramount fantasy “The Last Airbender,” which arrives Thursday in 3,169 theaters across North America – over half in 3D — while facing solid tracking but some of the worst reviews this side of “Jonah Hex.”

For one thing, there’s the fate of the PG-rated film’s auteur director, M. Night Shyamalan, who was (in)famously declared “the next Steven Spielberg” by Newsweek eight years ago. 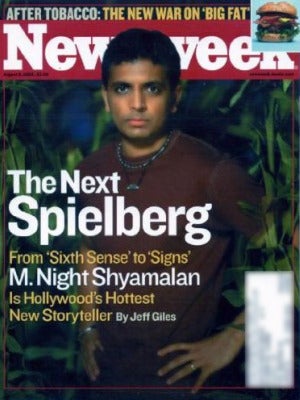 That July 2002 cover story coincided with “Signs,” Shyamalan’s last global hit. Now, not only is the filmmaker looking to move beyond several unsuccessful efforts – most notably, 2006’s “Lady in the Water” – he’s trying to establish himself as a guy who can handle big, family-targeted franchise films, a la “Iron Man” mastermind Jon Favreau.

Which brings us to Paramount and parent company Viacom, and their ambitious plan to transition a Nickelodeon channel cartoon hit into a film series replete with licensed toys.

Paramount reportedly paid $150 million to produce “Last Airbender,” and another $130 million to market the film globally (although some of that spend involved TV promotion on Viacom networks including MTV and Nick).

Premiering amid the female-audience rush to see “Eclipse” – the latest “Twilight” film opened to a record $30 million in midnight shows Tuesday – “Airbender” is counterintuitively scoring well in terms of both interest and intent-to-see among male moviegoers.

Tracking suggests the film will open to at least $45 million this weekend.

“Tracking says families are interested in the movie, particularly those with young boys,” said Don Harris, general manager of distribution for Paramount.

“They  have the highest awareness and interest levels in both male quadrants,” added a rival-studio distribution official. “They will definitely do some business.”

Meanwhile, according to online ticket seller Fandango, which surveyed its recent buyer rush for “Eclipse,” 22 percent said their other most anticipated summer film was “Airbender.” That was the highest number in the survey.

For “Airbender” to open big, however, it’s going to have to overcome some obstacles.

One is Disney/Pixar’s “Toy Story 3,” which will not only rival “Airbender” for family audiences over the weekend, but 3D exhibition, too.

“There’s a certain level of difficulty when a movie like ‘Toy Story’ is doing so well, but we seemed to hold our own,” Harris said, noting “Airbender’s” screen count.

Perhaps even more problematic for “Airbender,” however, are reviews that aren’t just bad … they’re really bad.

In fact, until USA Today’s Scott Bowles chimed up with happy thoughts Wednesday, aggregator Rotten Tomatoes was scoring the film at a conspicuously unfresh 0 percent.

“‘The Last Airbender is an agonizing experience in every category I can think of and others still waiting to be invented,” wrote critic Roger Ebert.

That doesn't even take into account the fans that Paramount has alienated with its controversial decision to cast white actors in parts that were written for Asian actors in the hit television series on which the film is based. Racebending.com announced that it would lead picket in front of theaters in Seattle and Los Angeles on Thursday in protest to Paramount's casting choices.

Paramount did not immediately respond to requests for comment.