It turns out Al Pacino is a Timothée Chalamet stan. The Oscar-winning actor enthusiastically said that Chalamet should be the one to play a younger version of himself should a sequel to “Heat” ever make it to the big screen.

Pacino was asked the question by moderator Bilge Ebiri at the Tribeca Film Festival on Saturday, where fans were treated to a 4K restoration of Michael Mann’s incredible 1995 crime thriller, but also were given an advanced copy of the book “Heat 2.” Mann co-wrote the book himself with Meg Gardiner, and it hits shelves in August.

Given the new source material, which is both a sequel and a prequel to “Heat,” many have wondered who should play Pacino’s Lt. Vincent Hanna and Robert De Niro’s Neil McCauley should a film adaptation come to fruition. Don’t be surprised that De Niro didn’t have much of an answer, but Pacino didn’t miss a beat and enthusiastically shouted, “Timothée Chalamet!” 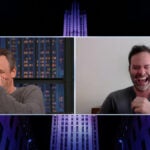 “He’s a wonderful actor,” he added to cheers at the panel.

Mann was unable to attend the event due to a COVID diagnosis while prepping his “Ferrari” biopic starring Adam Driver in Italy, but he did leave the crowd with a video message.

Mann’s “Heat 2,” meanwhile, begins one day after the events of “Heat” as Val Kilmer’s character is holed up in Koreatown desperately trying to escape Los Angeles while still being pursued by Hanna after he killed McCauley in a gunfight. But the film also flashes back seven years earlier and is set in Chicago as McCauley and his crew are taking scores across the country and Hanna is working as a homicide detective in the Windy City.

Elsewhere in the panel, Pacino also mentioned that he was a fan of the limited series “The Offer” on Paramount+, in which another actor, Anthony Ippolito, portrays an even younger Pacino ahead of the making of “The Godfather.”

And Pacino was also asked about his iconic line reading from “Heat,” in which he bellows “she’s got a great ass!,” something that genuinely surprised co-star Hank Azaria because it wasn’t planned.

“How about this: I didn’t know I was going to do it!” Pacino said. 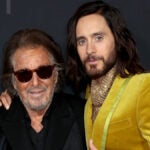 Also Read:
Jared Leto Has an Idea for a ‘House of Gucci’ Prequel With Al Pacino (Video)