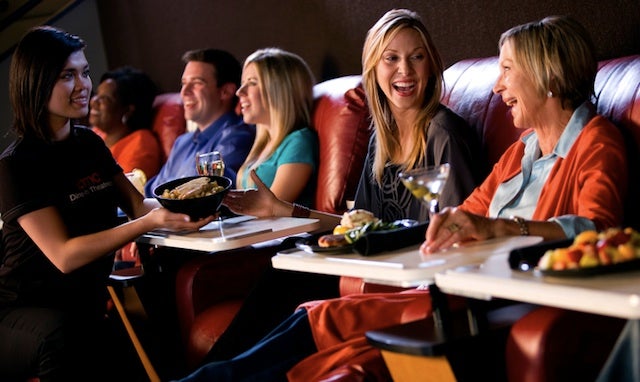 The sign on the moldering marquee outside the long-abandoned Metro Theater on New York's Upper West Side proclaims "Coming in 2014" alongside an inviting logo that reads Alamo Drafthouse Theater.

Get used to that kind of coming attraction: Alamo is one of a growing number of theaters thriving in a challenging exhibition environment by offering expanded amenities including dinner, alcoholic drinks and reserved seating. The Austin, Texas, chain is planning to unveil three locations in New York City over the next two years and at least one in downtown L.A. It's part of a master plan to bring its menu featuring Guinness and Vanilla shakes and Royale with Cheese burgers (catch the reference?) to as many as 50 locations in five years.

"There’s an opportunity here and I'm gambling every penny I ever owned and then some on it," Tim League, CEO of Alamo Drafthouse, told TheWrap.

The move toward expanded amenities began more than a decade ago, but it has been going mainstream. Major chains have taken a page out of Alamo's playbook. Pacific Theaters has been expanding its upscale Arclight Cinemas operation. Even AMC has launched dine-in service with made-to order menu items in 11 of its more than 300 locations and is considering other expansion opportunities.

With U.S. movie fans getting choosy about 3D, exhibitors are looking for other ways to lure theatergoers.

"There are a lot of screens in our industry and it feels like we need to create better quality screens," Jennifer Douglass, AMC's vice president of dine-in theater operations, said. " As opposed to adding more screens, we should be making our existing screens more productive and more useful." In 2011, there were between 300 to 400 theaters offering restaurant service; now there are between 400 to 500 locations, according to estimates by the exhibition trade association, the National Association of Theater Owners.

This at a time when the number of theaters overall is declining. The number of theaters domestically have shrunk from 7,418 to 5,722 during the past 15 years, or a 23 percent drop. More are expected to call it quits rather than pony up the tens of thousands of dollars needed to convert from film to digital projectors.

Yet theaters like the Mexican-based Cinepolis, which is exporting its brand of luxury theaters to Southern California, and the Texas-based  Studio Movie Grill, which is opening at least three new theaters in Ohio and North Carolina, are expanding along with Alamo.

Chains like Landmark are pouring resources into their existing locations to meet the demands of discerning moviegoers. In addition to building a new theater next year in undisclosed East Coast location, Landmark has remodeled nine of its 59 theaters in the last three years. The chain offers reserved seating and higher quality concessions than the average multiplex.

"We’re going after a sophisticated mature customer," Ted Mundorff, CEO of Landmark Theaters, told TheWrap. "We want someone who loves film and wants to see films in an auditorium without disturbances like cell phones and texting."

Michael Whalen, chief executive officer of Paragon Theaters, argued that movie theater operators didn't do enough to create a customer friendly experience. "Instead they just ratcheted up the price of popcorn and tacked on a 3D or an IMAX charge and alienated the audience," he said. "People in the industry lost the value equation for why we go to movies. They let the floors get sticky while the seats became uncomfortable."

Whalen has built a business in Florida by rehabbing down on their heels multiplexes and outfitting them with oversized leather chairs, swivel tray tables and a concession stand that sells flatbreads and burgers.

"We're trying to create something that feels like the neighborhood theater we went to as a kid but with modern amenities and an intimate space," Whalen said.

He plans to build a new theater in Newport News, Va. this year and is also rehabbing another theater in Naples, Fla.

"Everybody has sort of been doing the same thing  for years and years and years and now we’re able to shake the model up," Matthew Viragh, the founder and executive director of the Brooklyn, N.Y.-based dine-in theater Nitehawk Cinema, said. His theater was already cash positive less than a year opened its doors in 2011, which beat his most optimistic projections.

He said the changes are necessary for those that want to compete against home theaters.

"So the reaction from exhibitors has to be to become more inviting and more exciting, so it's actually like it was 80 years ago when going to the theaters was an event."