Alamo Drafthouse has announced its reopening dates for 15 theater locations across the country, including its locations in Brooklyn, New York and Los Angeles.

The Alamo Drafthouse Brooklyn will open on May 7, and the Los Angeles location in downtown will open on May 28, and the remaining spots will all reopen throughout the end of July. By the end of the summer, Alamo’s circuit footprint will be doubled compared to the theaters current open locations, with over 30 spots across the country, including the Dallas, Omaha, San Francisco, Lubbock, Laredo, and Yonkers areas back into the lineup.

While reopening has been difficult for all theaters, Alamo Drafthouse’s premium in-theater dining has created an additional challenge, and the new 15 locations are reopening with enhanced safety protocols, HVAC upgrades and technology upgrades that they boast makes them safer than supermarkets, bars and restaurants. And some of the new COVID-era additions, such as pre-ordering food and beverages and pirvate theater bookings, will stick around. 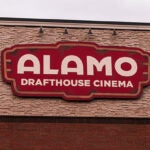 “We’ve spent the last eight months refining what we think is the safest and most relaxing cinematic experience possible,” Tim League, Alamo Drafthouse founder and executive chairman, said in a statement. “We are thrilled to finally be able to bring what we’ve learned to New York, Los Angeles, and many other theaters for what we hope is the home stretch, and a colossal season of big movies.”

The first 3000 people to attend the Brooklyn reopening will even get a scratch-off ticket good for free food and surprises. The theater will reopen with a mix of repertory offerings of “The Lord of the Rings: The Fellowship of the Ring” as hosted by Stephen Colbert, “Do the Right Thing” and “The Wiz,” as well as new titles like “Demon Slayer,” “Mortal Kombat,” “Wrath of Man” and the “Sesame Street” documentary “Street Gang.”

Earlier this week, an auction for Alamo Drafthouse was canceled after no additional bids were received to take control of the movie theater chain. as part of its bankruptcy that was filed on March 3. The cancellation means Fortress Investment Group and Altamont Capital can move ahead to take control of the company. League and other original investors are also among the minority partners. Fortress is a new investor in the company while Altamont was a pre-existing investor before the chain’s nationwide closure amid the COVID-19 pandemic.

A full list of dates for theater reopenings is below: