Alan White, the longtime drummer for progressive rock band Yes, who also played with John Lennon’s Plastic Ono Band, died at his home in Seattle after a brief illness, his family announced on Thursday.

“Our beloved husband, dad, and grandpa, passed away at the age of 72 at his Seattle-area home on May 26, 2022, after a brief illness. Throughout his life and six-decade career, Alan was many things to many people: a certified rock star to fans around the world; band mate to a select few, and gentleman and friend to all who met him,” the message on his official website read.

White was born in Pelton, County Durham, England on June 14, 1949. He began piano lessons at age six, took up drums at age 12 and started performing publicly when he was 13.

In the 1960s, he played with numerous bands, including The Downbeats, before joining ex-Cream drummer Ginger Baker and Steve Winwood, formerly of Traffic, in the band Airforce in 1968.

In 1969, Lennon called, asking him to join the Plastic Ono Band. Their live album “Live Peace in Toronto,” sold millions of copies. White continued to work with Lennon on tracks including “Instant Karma,”
“Jealous Guy” and “How Do You Sleep at Night.” 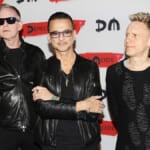 White joined Yes in 1972, replacing Bill Bruford, with only three days to prep for Yes’ U.S. tour. He has been a member of the band ever since and with the passing of co-founder Chris Squire in June 2015, was the longest continuously serving member.

White and the surviving members of Yes were inducted into the Rock & Roll Hall of Fame in 2017. Their hits include “Roundabout” and “Owner of a Lonely Heart.”

He is survived by his wife of 40 years, Gigi, his children Jesse and Cassi, and grandchildren JJ and Ellie.