Alec Baldwin is calling for every film and TV set that utilizes guns on set, fake or otherwise, to have the production hire a police officer to “specifically monitor weapons safety.”

Baldwin tweeted the statement from his Twitter account, which is now private, on Monday morning. It’s his latest update in the wake of the tragedy on the set of his film “Rust,” in which the film’s cinematographer Halyna Hutchins was killed.

Baldwin previously told reporters that he was “extremely interested” in limiting the use of firearms on sets following the accidental shooting, though he noted the long history of movies that have used guns without incident and said there should be a revision in safety policies.

“So what has to happen now is, we have to realize that when it does go wrong and it’s this horrible, catastrophic thing, some new measures have to take place,” he said last month. “Rubber guns, plastic guns, no live — no real armaments on set. That’s not for me to decide. It’s urgent that you understand I’m not an expert in this field, so whatever other people decide is the best way to go in terms of protecting people’s safety on film sets, I’m all in favor of and I will cooperate with that in any way that I can.”

His comments join a growing chorus of industry workers who have called for the outright ban of live firearms on set. Last week, a group of over 200 cinematographers that included Rachel Morrison (“Mudbound”), Reed Morano (“The Handmaid’s Tale”), Bill Pope (“The Matrix”), Edward Lachman (“Carol”) and many more said they “vow to no longer work on projects” that use functional firearms for filming purposes. Other showrunners and producers, including Dwayne Johnson, have also said they would no longer use guns on set for their films.

“We vow to no longer knowingly work on projects using functional firearms for filming purposes. We vow to no longer put ourselves and our crew in these unnecessarily lethal situations,” the cinematographers said in an open letter. “We have safe alternatives in VFX and non-functional firearms. We won’t sit back and wait for the industry to change. We have a duty to effect change within the industry ourselves.”

Authorities in New Mexico are still investigating the accident on set of “Rust,” in which Hutchins was killed by a “lead projectile” fired from a gun held by Baldwin, also injuring the film’s director, Joel Souza. 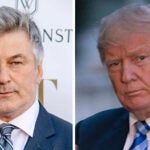