Alex Jones’ ex-wife Kelly said that the over-the-top, frequently flipped-out persona you’ve seen onscreen in Alex Jones is not an act, that he’s even worse in real life and “kind of crazy like Charlie Charles Manson.”

“In person, as a human being, he is more unhinged and weirder and terrifying and threatening and looming and raging, I would say, than on screen,” Kelly Jones told “The Young Turks” host Cenk Uygur in an interview Friday.

Uygur got straight to the point in his conversation with Jones, who sought custody of her children with the InfoWars host after their 2015 divorce because of his behavior and saying he’s “not a stable person.”

“So, Kelly, I think a lot of people wonder, is it an act with Alex Jones or is he really that unhinged?” Uygur asked. “Is he crazy or is he fake?” 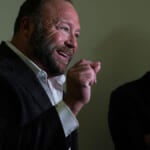 Also Read:
Alex Jones Flips on Trump for 2024 Presidency: ‘DeSantis Has Just Gone From Being Awesome to Being Unbelievably Good’

And she wasn’t shy about answering. “That’s a central con to my divorce that’s been reiterated through media,” she said. “His attorneys argued that he was a performance actor like Batman. And they did that to keep all the footage of ‘InfoWars’ coming before the jury saying that, ‘Oh, he’s not like that at all.’”

She continued. “In person, as a human being, he is more unhinged and weirder and terrifying and threatening and looming and raging, I would say, than on screen. And he’s, he’s, he’s modified on screen,” she said. “And you can see this… when he says, ‘Oh, I have to go off the air right now,’ because he’s going back into like the real person, right? The real rage is coming out.”

“I look at him as somebody that’s a kind of crazy like Charlie Charles Manson or like somebody that really needs to be institutionalized because he does,” she said. “He is a mentally ill, dangerous kind of mentally ill person. And his behaviors are abhorrent.” 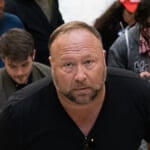 In early August, Jones was ordered to pay nearly $50 million in compensatory and punitive damages to the family of a 6-year-old Sandy Hook mass-shooting victim for claiming the 2012 shooting was a hoax. He now faces two additional damages hearings after he and his media company, Free Speech Systems, were found liable in Nov. 2021 for defaming and inflicting emotional distress on the victims’ families.

Among his other claims – NFL players who took a knee protesting during the national anthem were “kneeling to white genocide,” that global warming is a hoax concocted by the World Bank, that Hurricane Irma may have been geo-engineered, and that Michelle Obama is transgender.

Catch the interview in the video at the top.