InfoWars host Alex Jones was found guilty by default in all of the Sandy Hook shooting-related defamation suits against him on Monday.

A superior court in Connecticut ruled that because Jones has not turned over documents ordered by the courts, including financial records, he is guilty by default, according to the New York Times. All together, Monday’s ruling combined with three prior rulings in Texas grants the families of 10 Sandy Hook victims victories across four defamation suits.

A lawyer for Jones did not immediately return a request for comment from TheWrap. 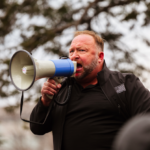 A Texas judge ruled in September that Jones was legally responsible for the damages caused by his false assertions about the Sandy Hook massacre. In documents released at the time, Judge Maya Guerra Gamble issued default judgments against Jones, a conspiracy theorist who contended the December 2012 shooting, which left 26 dead, was a “giant hoax.” Of the 26 who died, 20 were young children. According to Judge Gamble, Jones and InfoWars did not comply with court orders to give information for the lawsuits brought against him by the parents of two of the young victims.

Juries in Connecticut and Texas will decide how much Jones must pay the families in damages, as well as his court costs. The trials are slated for next year.