MSNBC host Alex Wagner wasn’t all that impressed by Sarah Palin’s concession statement, following the Alaskan Republican’s loss in a special election on Wednesday night. But Wagner also wasn’t all that surprised, particularly by Palin’s choice to not-so-subtly reference to guns in that statement.

In a bid to take over the late Don Young’s empty House seat, Palin lost the special election this week to Mary Peltola, a Democrat. With her win, Peltola becomes the first Alaskan Native to serve as a lawmaker in Congress for the state. Peltola’s win is monumental for Democrats, as Alaska has long been held by Republicans.

In her concession statement, Palin slammed the concept of ranked-choice voting, which is what Alaska uses in their elections, and noted that she intends to keep fighting to stay in politics. “Alaskans know I’m the last one who’ll ever retreat,” she wrote. “Instead, I’m going to reload…” To that, Wagner had a quick response.

“Because what would a concession statement be without a gun metaphor?” Wagner deadpanned. 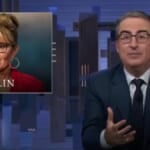 But the host quickly moved on and welcomed her guest, Mark Leibovich, asking him for his thoughts on why Palin lost, and what it might mean for Democrats at large in the midterms.

Leibovich explained that Alaska flipping to blue is a huge moment, and one that likely happened because Palin continues to be a vocal supporter of the twice-impeached former president, Donald Trump, and his 2020 election lies.

“It’s also kind of another celebrity, kind of, quasi-freak show candidate that comes from the Trump tradition, the Trump mold, that voters seem to be showing time and time again that they’re pretty sick of,” Leibovich said.

You can watch the full segment from Wagner’s show in the video above.