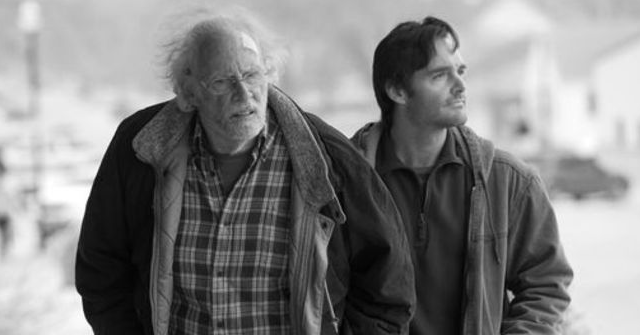 After a sun dappled excursion to Hawaii with his most recent family drama "The Descendants," Alexander Payne returns to his native Midwest in the aptly named "Nebraska," which debuted Thursday at the Cannes Film Festival.

It's another story of estranged parents and children and another road movie for an idiosyncratic director who has made a name for himself by contorting and collapsing the reliable genres to find something fresh and human in films like "Sideways" and "About Schmidt."

The buzz around the festival for the black and white indie was strong with critics singling out stars Bruce Dern, Will Forte and June Squibb for the lion's share of the praise. Talk on Twitter immediately after the film screened was that all three had put themselves in contention for Oscars.

"Nebraska" follows Dern's disheveled patriarch and his son (Forte) as they journey to Lincoln, Neb. to collect $1 million the older man believes he won in a Publisher’s Clearing House-type sweepstake. Not that the film didn't have its detractors — critics who griped that Payne, a veritable Woody Allen of the landlocked set, was mining overly familiar territory and falling short of his best work.

TheWrap's Sasha Stone didn't mind if Payne was working in his usual register, calling it one of the strongest films of his career. It's his most personal film, she wrote, but its portrait of an diminishing parent will register with anyone who has grappled with the exigencies of old age.

"'Nebraska' will break your heart in two, and it might broaden your understanding, a little bit, about welcoming your parents back into your life before the light dims on theirs," Stone wrote.

In Variety, Scott Foundas hailed the film's examination of a vanishing form of prairie life as poignant and reminiscent of "The Last Picture Show"s' depiction of a town struggling to adapt to changing mores.

"Throughout, Payne gently infuses the film’s comic tone with strains of longing and regret, always careful to avoid the maudlin or cheaply sentimental," Foundas wrote.

Foundas' fellow trade sage, Todd McCarthy was similarly taken with the film in his review in the Hollywood Reporter, although he did note that Payne's portrait of certain characters was overly "caustic." Like Foundas, McCarthy focused on the film's preoccupation with generational change.

"A strong sense of a vanishing past holds sway over an illusory future in Nebraska, Alexander Payne‘s wryly poignant and potent comic drama about the bereft state of things in America’s oft-vaunted heartland," McCarthy wrote. "Echoing the director’s most recent film, 'The Descendants,' in its preoccupation with generational issues within families, how the smell of money contaminates the behavior of friends and relatives and the way Wasps hide and disclose secrets, this is nonetheless a more melancholy, less boisterous work."

In a four star review in the Evening Standard, Derek Malcolm cited Dern's subtle work as the reason for the film's power.

"Dern, one of America’s best veterans, gets a chance to deliver the kind of performance he’s often been noted for," Malcolm wrote. "No grandstanding, but a thorough appreciation of the character he is playing."

Kaleem Aftab of the Independent predicted that "Nebraska" will leave Cannes with awards heat, but felt that Payne was hitting too many of the same notes.

"The trouble with 'Nebraska,' and it bubbles under the surface from the start, is that it feels like Payne revisiting familiar territory," Aftab wrote. "It is visually and dramatically very well realized, and will likely get a Best Picture Oscar nomination, yet this feels like a director working within himself."

Jeffrey Wells of Hollywood Elsewhere dismissed the film as "fine," in a review that damned with faint praise.

"I 'liked' it as far as it goes, but so much of it is about capturing the banality of sedentary Midwestern lifestyles, and the whole thing just feels overly measured and mid-range and almost resigned," Wells wrote.

His enervated response could just be a consequence of the bile he spewed all over Nicolas Winding Refn's "Only God Forgives." Given the litany of bathroom allusions he used in his assessment of the crime drama, Payne should consider himself fortunate to be let off the hook with a slight rap on the knuckles.

Nor was Wells the only reviewer left uninspired by Payne's offering. Jessica Kiang in IndieWire faulted the film for being overly predetermined, manipulative and stale, though said it wasn't bad as these things go.

"'Nebraska' is a small-scale quixotic adventure about the importance of dreams, no matter how pie-eyed, in which the outlined flaws could all be forgiven, if it just went somewhere a bit more surprising," Kiang wrote. "As it is, 'Nebraska' follows preplanned route map just too faithfully for us to take it fully to our hearts."