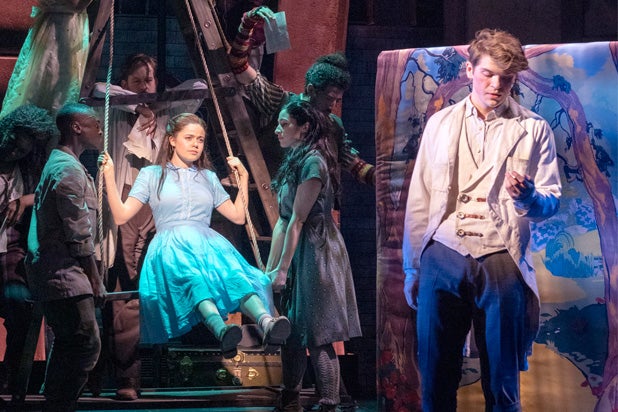 Every decade a New York theater stages an adaptation of Lewis Carroll’s “Alice in Wonderland.” Are any of these ever good enough to merit a major revival? Certainly not the most famous of them, which arguably would be Elizabeth Swados and Joseph Papp’s 1961 “Alice in Concert,” starring Meryl Streep and later adapted to “Alice at the Palace” for television.

MCC is the latest theater to bring Carroll’s picaresque fantasy to the stage, where it opened Tuesday at the company’s new Off Broadway space Newman Mills Theater. This version has the distinct advantage of being updated from the 19th-century to World War II London during the Blitz, and many of the liberties taken by book writers Steven Sater and Jessie Nelson are captivating.

Stuck in a grimy tube (the monumental set is by Edward Pierce), Alice Spencer (Molly Gordon) reads “Alice in Wonderland” out of boredom and wants to share this fascinating story with her sick friend Alfred Hallam (Colton Ryan), who has been quarantined in another section of the tube due to tuberculosis.

Any good musical needs a love interest, and as the musical “Alice by Heart” develops so does the budding romance between Alice and Alfred, who, in the show’s best revision, turns into the White Rabbit and has a thing about clocks because he knows he doesn’t have much time left on Earth. If the bombs don’t get him, the TB will. Quarantined, Alfred does have the advantage of not being subjected to the nutcases surrounding Alice. If war is hell, it’s also a madhouse in this underground world.

When Alice’s journey down the rabbit hole begins, it’s best that any audience be up on Carroll’s 1865 novel. For good reason, the Playbill comes with a directory that describes in detail the fantastical characters, from the Cheshire Cat to the Mock Turtle. Jessie Nelson’s direction and Paloma Young’s costumes do a colorful job of using found objects (rags, faded posters, torn pages, old flags) to establish the situations and characters. The score, by the “Spring Awakening” composer-lyricist team  Duncan Sheik and Steven Sater, front-loads the show with a couple of hit-ready tunes that border on infectious bubblegum.

But sometime between the Caterpillar and the Jabberwock, the novelty wears off and the narrative isn’t strong enough to push the show forward. It’s the problem with almost any “Alice in Wonderland” stage adaptation — or any picaresque tale, for that matter. A stringing together of scenes may work in novels or the movies, where the mise-en-scene is all-important, but the theater demands a stronger narrative drive. “Candide” has never completely resolved its book problems, despite many writers’ attempts. Erica Jong’s riff on Moll Flanders, “Fannie Hackabout-Jones,” sank fast. And it seems there’s always another “Tom Jones” musical out there that never sees the light of a stage.

The title character in “Alice by Heart” does want something more than Carroll’s Alice. She wants the war to be over and she wants her boyfriend to live to see that day. Sater and Nelson’s book, however, never makes her desires strong enough to fuel the show. She’s no Dorothy looking to escape Oz and go home. The production also distances us from the drama by having Alice continually refer to the original book; she keeps dropping pages from Carroll’s novel. At several points, you may find yourself wanting to grab that book just so you know what’s going on.

While charismatic performers are always a plus, the actors here are uniformly arch and operating under the delusion that they’re a lot more fascinating than they are. Several are downright repellent in their depiction of Carroll’s creatures. And why does every English accent turn frighteningly American as soon as anyone sings?

Post-bubblegum, Sheik overloads “Alice by Heart” with a number of interchangeable ballads. The lyrics are another matter. Sitting in the theater, I couldn’t follow them. Reading them the next day, I found Sater’s wordplay vivid and imaginative, an effective replication of Carroll’s prose. Perhaps repeated listenings in the theater would help, but not that that’s likely ever to happen.