Alicia Keys and Nicki Minaj were among the big winners at the 10th annual BET Awards on Sunday, a night when onetime awards-show pariahs Kanye West and Chris Brown performed, and tributes were staged to both Michael Jackson and the artist Jackson regarded as a serious rival, Prince.

Keys and Minaj (photo below) were the only nominees to win more than one award; Keys was honored as Best Female R&B Artist and for her collaboration with Jay-Z, “Empire State of Mind,” while Minaj was named Best New Artist and Best Female Hip-Hop Artist. 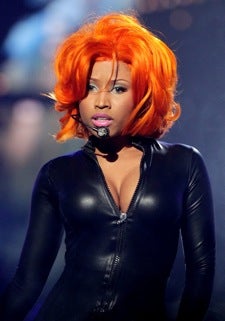 Justin Bieber, a rare white nominee, skipped the ceremony to perform a previously-scheduled concert in Milwaukee.  He was in the running for Best New Artist, which Minaj won.

On the movie side, “Precious: Based on the Novel ‘Push’ by Sapphire” was named Best Movie, while Mo’Nique and Idris Elba were honored as Best Actress and Best Actor.

Serena Williams and LeBron James won awards as Sportswoman and Sportsman of the Year.

In keeping with most other music-heavy awards shows these days, the broadcast on Black Entertainment Television was longer on performances than on awards.

Kanye West opened the show performing the song “Power” atop a mock volcano, but did not take the stage uninvited to correct any miscarriages of justice, the way he did at last year’s MTV Video Music Awards when Taylor Swift won an award he thought should have gone to Beyonce.

Chris Brown, eliminated from last year’s BET Awards tribute to Michael Jackson after his arrest on domestic violence charges, performed his own salute to Jackson.  He broke down in tears as he began the Jackson song “Man in the Mirror.”

Queen Latifah hosted the show, which took place at the Shrine Auditorium in Los Angeles.

Winners were chosen by a group of industry insiders, music journalists and randomly-selected fans.

Best Movie:  “Precious: Based on the Novel ‘Push’ by Sapphire”