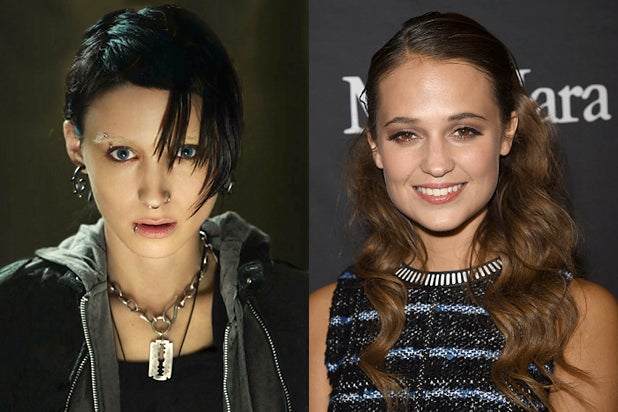 Rooney Mara will not reprise her role as hacker heroine Lisbeth Salander in Sony’s forthcoming adaptation of “The Girl in the Spider’s Web” and Sony Pictures is interested in having Alicia Vikander replace her in a proposed reboot of the franchise, an individual familiar with the studio’s thinking has told TheWrap.

Director David Fincher and star Daniel Craig are also unlikely to return for the sequel, which will be based on the fourth novel in the late Stieg Larsson‘s Millennium series that was written after his death by David Lagercrantz.

Sony had initially been planning to adapt “The Girl Who Played With Fire,” shelling out mid-seven figures for a script by Steve Zaillian. “Fire” is now expected to follow “Spider’s Web,” which Oscar-nominated writer Steven Knight (“Locke”) is in negotiations to adapt for the studio.

The “Dragon Tattoo” sequel is expected to come in at a much lower price than Fincher’s film — a holiday release that had difficulty recouping its $90 million budget, not including P&A costs.

Sony isn’t expected to start the high-profile casting process until after Knight delivers a script, but Rudin and Pascal are said to be fans of Vikander, who has the right look to play Lisbeth — which could make for a smoother transition.

Vikander is one of Hollywood’s brightest young stars and an edgy character like Lisbeth Salander would counterbalance her acclaimed work in period dramas such as “The Danish Girl,” “Anna Karenina,” “A Royal Affair” and “Testament of Youth” The Swedish starlet can currently be seen opposite Bradley Cooper in “Burnt,” and has “Tulip Fever” and the next Jason Bourne movie on the horizon.

Lagerkrantz is represented by Madgalena Hedlund at The Hedlund Agency, while Yellow Bird is repped by UTA.